One of the great oddities of the original Transformers cartoon of the 1980s was the inclusion of a character named "Skyfire." Skyfire was a fairly central character to a couple of early episodes, yet wasn't (directly) based on a toy. Even Reflector was based on a toy — albeit one that wasn't available in the US for a few years (and, as those who've read that old entry already know, even that only by mail order). To understand how this came to pass, some explanations are in order.

There was a toy named Jetfire, but while Skyfire clearly fills Jetfire's role in the cartoon, he was not only given a new name, but a significantly different appearance in both robot and jet modes. This has long been understood to arise out of the fact that the Jetfire toy was produced using a mold created not by usual Japanese collaborator Takara, but by a rival company named Takatoku Toys* (a company also responsible for the molds that became the original Roadbuster, Whirl, and the so-called "Deluxe Insecticons"), but it is worth noting that none of the other Takatoku-sourced characters ever made it into the cartoon at all, not even under an alias as Skyfire did. Since Jetfire and these other toys did make appearances in other materials published in the US and elsewhere (although the Marvel Comics version of Jetfire still retained Skyfire's character design), the most likely theory is that Hasbro wanted to appease Takara while the US-created Transformers cartoon aired in dub form in Japan. But we'll likely never know what happened for certain.

Hasbro has released a few Jetfire toys paying homage to the Skyfire form over the years, but never one that was truly intended to represent the character as he appeared in the 80s cartoon. It is unlikely at this point that they will ever do so. Enter third-party provider Fans Toys, who have created "Phoenix," which captures the Skyfire look more closely than I had previously considered possible. Seriously, the attention to detail on this toy is truly amazing. Jet purists may complain that this "flying box" would not be terribly airworthy in the real world, but such considerations have never meant much to me. This is what Skyfire's jet mode is supposed to look like! 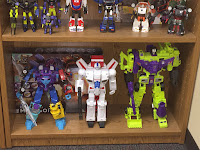 Phoenix is a huge robot, standing larger than the combined forms of most recent Combiner Wars robots, and is indeed almost as tall as Combiner Wars Devastator! That doesn't make it the single largest transforming robot I own (the two versions of the original Fortress Maximus mold I own still hold that honor), but it's certainly a contender!
*Takatoku went bankrupt in 1984. Their designs were purchased by Bandai at that time. Bandai is also a Japanese company that competes against Takara. Hasbro licensed the designs from Bandai for American use.
Posted by Mark Baker-Wright at 9:00 AM