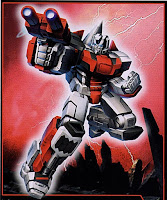 And so it ends. A few weeks ago, subscribers to the fifth (and final) Transformers Figure Subscription Service put together by the recently-defunct Transformers Collectors' Club started receiving the final shipment from Fun Publications. This shipment included the already-announced Toxitron and Counterpunch toys, as well as the "mystery figure" for this subscription service, which turned out to be a Combiner Wars version of Shattered Glass Starscream. 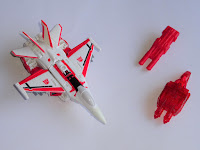 Way back in 2008, when the Shattered Glass concept was introduced, the BotCon box set for that year included a Starscream figure using a Cybertron Starscream mold in G1 Jetfire colors. This toy essentially repeats that pattern with the Combiner Wars mold originally used for Combiner Wars Skydive, but which was given a Starscream head for the "Ghost Starscream" figure included with the Japanese-exclusive Grand Galvatron set. Using this variation allowed the club to advertise, back when preorders were being taken in late-April and May of last year, that the mystery figure would include a head tooling never before released in the United States.

That tidbit of information, coupled with a simple process of elimination, meant that a lot of folks had guessed that the "mystery figure" would indeed use this particular mold/head combination many months ago, but I'm not aware of anyone that guessed it would be this character. A couple of folks considered the idea that it might be a Shattered Glass character, but those I was aware of were suggesting a new version of Shattered Glass Thundercracker, which I would certainly have welcomed, but never truly expected. Reaction to the reveal of Starscream has been mixed. Some complain that it's a new version of a character Fun Publications has already given us (this would also have been true of SG Thundercracker, of course). Others are disappointed in the mostly-white color scheme (although it manages to be fairly distinctive when compared to other versions of the mold, as even the Aerialbot use was for one of the members not known for being mostly white and red), while others have embraced its Jetfire-inspired deco. Even some who care little for Shattered Glass have been happy to repurpose this toy as another character (a common choice is R-Blade, who also used a heavily Jetfire-inspired deco).

For those who care about specific-universe designations, Pete Sinclair has informed us that this toy does not represent the same Starscream as the one from the BotCon 2008 set. Rather, this one is from a different "Shattered Glass" universe, specifically a Shattered Glass variation on the classic 1980s cartoon produced by Sunbow. Just as there have been many variations of Generation One in Transformers history (let alone the many other interpretations of the Transformers concept over the years), so are there intended to be many Shattered Glass universes out there, only a tiny few of which have been mentioned in official materials to date.

I find it intriguing that both Skyfall (the first toy to be revealed by Fun Publications for the Official Transformers Collectors' Club) and this Starscream (the last) turned out to be good-guy jets who formed parts of combiners. While I'm sure that this is more "happy accident" than anything truly intentional, it nonetheless presents an interesting symmetry.

As of this posting, Hasbro has promised (many months ago) to offer a new official Transformers club to take the place of the Fun Publications-run one, but we're still awaiting details. If and when such a club comes to exist, I'm sure I'll have something to say about it. In the meantime, I still have many toys from this club that I still haven't gotten around to featuring, to say nothing of all of the toys that weren't specifically tied to the club. Stay tuned.