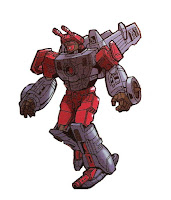 As 2016 draws to a close, so does the tenure of Fun Publications' stewardship of the Official Transformers Collectors' Club. Although a few pre-ordered toys remain to be sent to club members in the next month or so, the club officially ends on December 31st. In recognition of this passing, let's go back to the year 2005 (one that has long had significance in Transformers lore) and have a look at the very first Fun Publications Transformer exclusive: Skyfall.

Right out of the gate, the club made it clear that they were attempting something very ambitious. Over the course of five years, five parts of a combiner would be offered as membership incentives, one available for "free" each year with the payment of that year's membership. Skyfall formed the leg (or an arm, if you preferred) of the combiner that eventually came to be known as "Nexus Prime."

But between 2005 and Nexus Prime's completion in 2009, fans had to make do with the individual components. Skyfall was a repaint of Energon Terradive (and, in fact, came with Terradive's instructions. Fun Publications would start printing instructions specific to their characters soon afterward, but this is just another sign of how early this toy was), done in clear plastic. Many fans have speculated that the predominantly blue color scheme, combined with the fact that Skyfall's vehicle mode was an A-10 bomber plane, was intended to evoke the Cobra Rattler, an iconic jet from the G.I. Joe line (for which Fun Publications had already been running a separate club), but I've never heard this confirmed. That said, red and blue colors would continue to be used for the other parts of Nexus Prime, making it one of the more color-cohesive combiners in the entire Transformers franchise. 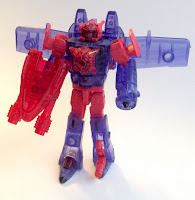 Being the first toy released for the Transformers Collectors' Club, long-time readers may wonder how it is that it's taken me this long to do a feature on Skyfall. The reason stems from the growing pains of Transforming Seminarian (the predecessor to this blog), which itself was mere months old when this toy came out. Before I started doing regular toy features (in 2008), I thought to start a series of character bios in the vein of the old Transformers Universe series published by Marvel in 1986. I completed an entry on Skyfall, which was posted in July, 2005, only to discover that the club started doing full-page bios of their own (albeit patterned off of the more recent More than Meets the Eye books done by Dreamwave in 2003) only a month or two later. Not wishing to tread on the club's territory, I removed the file, leaving only a thumbnail at the original site. Although I dropped the idea of doing any further bios at that point, I did keep the file, and share it now as an historical curiosity.
Posted by Mark Baker-Wright at 9:00 AM