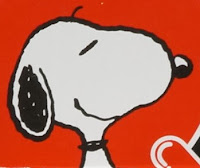 While Transformers fans in the United States have seen the franchise crossover with the occasional outside franchise, including some Marvel superheroes, as well as the Star Wars figures of a few years ago, such crossovers are a bit more common in Japan. We've already seen examples of this with Mickey Mouse and Donald Duck, but Japan's crossovers have been by no means limited to Disney characters, as the Q-Transformers line demonstrates. 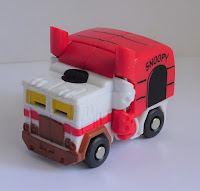 The Q-Transformers are tiny little toys, each one measuring less than a couple of inches square, featuring simple transformations to match their small sizes. While most Q-Transformers do indeed feature traditional Transformers characters (if in a super-deformed form) the truck mode seen here was created for a sub-line called Q-Collaboration. While the cab resembles that of Optimus Prime, this mold wasn't ever used for any Optimus Prime character, but instead was used several times over to represent characters from other properties, just replacing the head and changing the colors around each time to achieve a new character. Thus, this mold was used not only for Snoopy, but also for Hello Kitty, her friend My Melody, and several other, unrelated, characters. 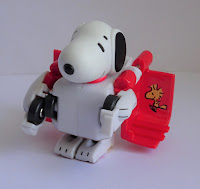 The simple transformation of this toy gives Snoopy a bit of a cape in robot mode, which the deco folks kindly decided to spruce up by adding an image of Snoopy's pal Woodstock on one side. It probably doesn't make any sense if one imagines a robot Snoopy running around in the world, but I don't think anyone's seriously thinking about fictional applications with these guys. It's just a fun and inexpensive way to combine Transformers with some well-loved franchises.

Q-Transformers are a couple of years old now, but I imagine that you can still find examples fairly inexpensively with only a little bit of effort if you're interested.
Posted by Mark Baker-Wright at 9:00 AM