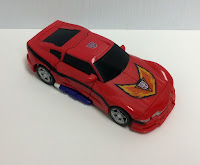 The "Invasion!" set, which also included the previously-featured Shattered Glass Treadshot figure, was something of a hybrid, combining Shattered Glass figures with new "Classics" figures from the continuity set up for the 2006 line of toys that ushered in the "neo-G1" wave of toys that continues to this day with the Generations line (and, indeed, the "Classics"-themed set for BotCon 2007 was the first BotCon set ever to sell out, so it was also a demonstrated proven concept). The idea was that characters from the Shattered Glass universe were invading the Classics universe, and the set represented the clash that resulted. 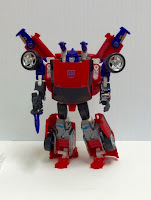 Shattered Glass "Turbo Tracks" is a redeco of (as one might assume) the then-recent Reveal the Shield "Turbo Tracks" mold (we'll just call him "Tracks" from here on out. "Turbo Tracks" only exists because the adjective-less name "Tracks" isn't easily trademarked anymore). This mold was also used for club exclusives Runamuck and Over-Run/Runabout (among others). As followers of Shattered Glass know well, Shattered Glass toys draw inspiration for their alternative color schemes from a variety of sources. In Tracks' case, the color scheme is that of the pre-Transformers Diaclone version of Tracks (then just called No. 21 Corvette Stingray) which was later officially brought into the Transformers line as Road Rage. In fact, e-HOBBY, a retailer affiliated with TakaraTomy that sold the first Road Rage toy as an exclusive, has officially suggested that the BotCon Shattered Glass Tracks toy can be repurposed as Road Rage (they don't seem to go so far as suggesting that you put a proper red-colored Autobot symbol on the toy, but you really should if you want this toy to be Road Rage rather than Tracks). 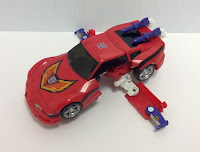 Fans differ on how successful the "Invasion!" set was. While the set including Tracks did sell out, it only did so at the convention, rather than before, as had been the pattern for the previous several years. It should be noted, however, that the convention was growing during this time, such that there were twice as many BotCon 2012 sets made as there were BotCon 2008 sets, and several hundred more than the record-setting BotCon 2011 set just the previous year. Fun Publications was getting more ambitious, and at least so far, those ambitions were paying off.

Fans also are of mixed minds on the whole Shattered Glass concept, with quite a few outright hating it. Even so, sales of Shattered Glass figures were almost always high, with more such figures being released by Fun Publications as late as 2015, and the concept continues even beyond the end of the BotCon era in the form of a Masterpiece toy released by Hasbro Asia just a few months ago. Perhaps the concept isn't for everyone, but it's clear that it does indeed resonate with a great many fans willing to put their money where their mouth is. As long as that remains the case, it seems likely that the Shattered Glass concept will continue.
Posted by Mark Baker-Wright at 12:00 PM