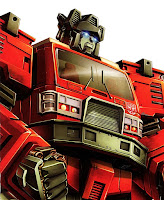 For the 25th Anniversary of the Transformers franchise, Hasbro released toys in their Universe line designed to pay homage to nearly every major iteration of the Transformers franchise released to date. Some iterations got more attention than others. Generation One received the most figures (often, but not exclusively, under the label "Classic Series"), which presumably surprised no one, while other iterations got only a figure or two. To the best of my knowledge, the sole representative of Generation Two was Inferno.

To use Inferno as the anniversary representative of Generation Two is a little odd. While there certainly was an Inferno figure released during Generation Two, it not only was just a reuse of the same mold as the one Inferno had during Generation One, but was all-but identical to it. The only discernible differences between the G1 and G2 Inferno toys were 1) an "Autobot" tampograph placed on the G2 figure, and 2) an extra water-shooting weapon added to the G2 set. Of these differences, Inferno's Universe toy doesn't even attempt to homage the G2 "Autobot" tampograph, and the water-shooting weapon seems to be homaged by an utterly dissimilar-looking missile launcher where the missile has been molded and cast in transparent blue plastic to resemble a bolt of water. There's really no reason not to assume that this toy is a G1 homage like so many other Universe toys, except that Hasbro wrote "Generation 2 Series" on the side of the box.

As odd as all that is, Universe Inferno is a rather nice toy, and in fact has been used several times in the years since to represent other fire truck-mode characters. I like this mold so much that I think I've actually collected every new-character version of the mold ever created (at least five characters), including the previously-featured BotCon 2010 Spark (Pyro) figure, which was much more appropriately a Generation Two homage, complete with the distinctive G2 Autobot symbol, which this Universe figure utterly lacks.

Generation Two purists are quick to point out that a lot of actual G2 toys lacked G2 faction symbols, which is true enough. Even so, I'd think that the powers-that-be would have done better to homage a character that at least had a distinctive G2 color scheme. It wouldn't have taken any difficulty at all, for example, to have repainted the Universe Sideswipe figure in a color-swapped G2 version. Of course, if they did, then it wouldn't have been an option for the BotCon 2010 customizing class exclusive, but I imagine that a lot of Sideswipe fans would have preferred that particular toy to have been available at retail, anyway....
Posted by Mark Baker-Wright at 9:00 AM