At the time that Fun Publications first obtained the license to do official Transformers conventions in 2005, their predecessor had revealed a number of concepts left undone, and despite outspoken requests for FunPub to go ahead with those concepts, FunPub made it clear that they had ideas of their own that they wanted to do instead. Oddly enough, at least two of the toys that were actually included in the seven-figure box set for BotCon 2005 used the same molds as those unproduced concepts. One of these was Deathsaurus (which used the same mold as a Beast Wars Megatron concept... which might yet come out at BotCon 2016). The other was Fallback. 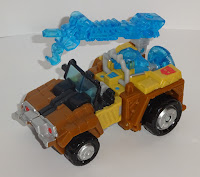 Before we get to the unproduced concept, let's deal with Fallback himself. Using the mold created for Strongarm in the Energon line, Fallback is intended to be the same character as Outback from Generation One (one of the mini-vehicles covered here). Trademark lawyers seem to be a lot more aggressive about possible trademark infringement in the 21st century than they were in 1986, and a popular Australian-theme restaurant chain has since laid a well-known claim to the name "Outback," so the alternative name "Fallback" was created (note that said restaurant chain was founded a couple of years after Outback/Fallback's original toy, but they apparently didn't care about whether or not they infringed on Hasbro's claim!). 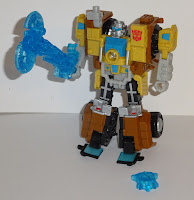 The unproduced concept revealed by FunPub's predecessor would have involved using this mold to create a new version of Generation One Brawn. That toy would have not only had a new head, but would apparently have created all-new attachments to give Brawn "energon fists." Since the original Outback was, himself, a retooling of the original Brawn toy, it's hard not to wonder if there was some intention of an homage to that unproduced concept, but I know of no such intention having ever been explicitly stated. In any event, Fallback includes no remolding whatsoever, which is perhaps just as well, since the Brawn-concept remolding wouldn't have been appropriate for Outback/Fallback, anyway.
Posted by Mark Baker-Wright at 9:00 AM