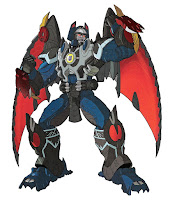 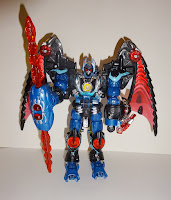 Deathsaurus was created using the Gigatron mold from the 2000 Car Robots line (which came to America the following year as the backbone of the original Robots in Disguise line, in which Gigatron was renamed "Megatron" to capitalize on name-recognition). The toy was recolored to resemble a character from the Japanese portion of G1 continuity. The name of the G1 character this toy homaged was, itself, the subject of fan debate for many years, with "Deathsaurus" being a favorite interpretation, but one that would seem to be denied by the romanized name on the Japanese package itself: Deszaras. Theoretically, the creation of BotCon 2005 Deathsaurus should have ended the debate, but there has been at least one attempt by Hasbro to try yet another variation in the years since then. 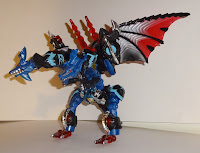 The original Gigatron mold was designed to transform into six different modes (including the robot mode), and was given a small remold later in the line (for the "Devil Gigatron" figure) to add an additional four, for a total of ten official molds! While I believe that this is a record that stands to this day, it does come with the disclaimer standard to all such multi-changers that many of the modes depend heavily on the imagination, bearing little resemblance to the actual items the modes are intended to resemble, although this double-headed dragon (by all indications, the alternate mode that prompted Fun Publications to choose this mold for their Deathsaurus figure) isn't too bad.

Mold potential notwithstanding, I hesitate to claim exactly how many official modes Deathsaurus has. First of all, the toy comes with the instructions for the original Megatron/Gigatron (six modes), despite actually using the "Devil Gigatron" version of the mold that made all ten modes possible. This is then complicated by the fact that Deathsaurus' remolded head eliminates the possibility of doing one of the modes (the "bat") actually suggested by those instructions (like most Fun Publications-exclusive instructions, no meaningful changes were made to the instructions vs. the retail version). The fiction doesn't really give us much help. "Decent Into Evil," the comic book story that accompanied the BotCon 2005 box set, only uses the aforementioned double-headed dragon and robot modes. The only other fiction featuring BotCon 2005 Deathsaurus appeared in the club magazine a few years later, but the only time Deathsaurus appears outside of his robot mode is a "More Than Meets the Eye"-style profile in Club Magazine issue #34, which despite containing a reference to research on "manipulating Transformers bodies to take on more than two distinctive forms," shows only this jet mode as a non-robot mode option, ignoring even the previously-established two-headed dragon mode!

So, is Deathsaurus meant to be a (mere?) triple changer, a five-changer, or even more? The ultimate answer is left to the individual fan. For those interested, here are the other two modes available in the instructions, a claw and a drag racer. I'll leave the rest of the known mold-options to your imagination. Besides, anything you're likely to come up with on your own would probably look just as convincing (or not) as those other questionably-official modes. 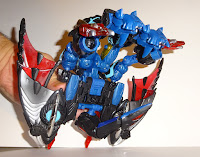