Going through my oldest Fun Publications exclusives in recent months has given me an opportunity to discover long-standing errors on The Unofficial Transformers Club and Convention Exclusive Data Pages that had thus far escaped my attention. Chromia represents one of these. For some reason, I had previously only acknowledged the new heads given to Deathsaurus and Ironhide. But the fact is that Chromia also has a head that was also created especially for the BotCon 2005 convention.

I'll get to the newly-created head in a moment. First, the basics. Chromia is a redeco of Energon Arcee, and thus transforms into a motorcycle with transparent "energon" weaponry (and an "energon star," just barely visible here behind the windshield). At the time, the number of obviously-female Transformer molds ever created could fairly easily be counted just using one's fingers. Thus, any attempt to do a convention exclusive female character had to go one of two routes: 1) look for a mold originally created for a non-female character, opening up a wide array of options, but practically guaranteeing that the fact that the character is female can only be conveyed through written material accompanying the toy (such as was the case with Nightracer, the first female character-toy released in North America*), 2) look for a mold originally designed as female, knowing that your options are instantly limited to possibly only one recently-created (and therefore known to still be viable) mold. I don't know that Energon Arcee was the only female-character mold viable at the time Fun Publications created Chromia, but the number of available options was indisputably limited. 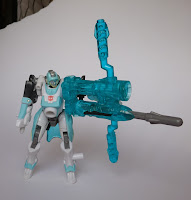 Chromia was one of a small handful of female Autobots first featured in the cartoon episode "The Search for Alpha Trion," which introduced the very concept of "female Transformers" to the franchise, and had never (as of 2005) been given a toy, so Fun Publications was attempting to do something pretty special with this example from its first-ever convention box set. That said, this toy wasn't actually designed to be Chromia at all! The color-scheme and new head are instead derived from another character from that same cartoon: Moonracer@. Unfortunately, the name "Moonracer" was unavailable for trademark reasons#. In fact, apparently the second name choice (whatever it was) was unavailable, as well, and Chromia was the "third or fourth choice," according to Fun Publications deco-designer Lanny Latham. Thankfully, trademark issues related to a toy don't necessarily have to impact appearances in fiction. When a character using a design clearly copied from this toy later showed up in Fun Publications-created stories in 2010, the name was given as Moonracer, as originally intended.
*Some obsessive fans may wish to point out that "Freezon" came out earlier, but this is a mere technicality. "Freezon" was the name given to one of the barely-transforming cars that came with the 1985 Transformers Electric Racing Set. But both the name and the gender were retroactively applied to this toy in 2009, well after Nightracer's BotCon 1995 release!
@The head is actually a bit of a mash-up between Moonracer and another character from "The Search for Alpha Trion" named "Firestar," in part due to the fact that Fun Publications reused the head for "Flareup," a character inspired by, but not the same character as, Firestar. It's all very complicated, which is why I'm shoving so much of this information down here in the footnotes!
#Conventional wisdom has it that the name "Moonracer" has been tied up by toys related to "King Moonracer," the leonine ruler of the Island of Misfit Toys from the classic 1964 Rudolph the Red-Nosed Reindeer television special.
Posted by Mark Baker-Wright at 3:00 PM