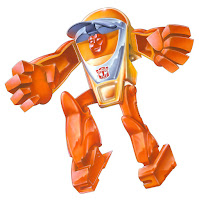 There are some characters that it's fashionable to dislike. Maybe there's good reason for it. Maybe not. Maybe the character has a few fans here and there, but those intrepid few risk ridicule from others if they make their affection for such a character known. Wheelie is just a such a character that people seem to love to hate.

We'll get to why Wheelie is so disliked in a moment. First, it's worth noting that Wheelie was the only Mini-Vehicle released in 1986 to use a completely new mold. All others released that year (here are some examples) were either rereleases or remolds of toys from the original 1984 line. In keeping with other new-to-1986 Transformers, Wheelie's vehicle mode is not based on a real car, but is rather a "futuristic" concept in keeping with the cartoon's new setting of the then-future year of 2005.

The robot mode is really pretty awful. The head's too small. There are no distinct hands (although images of fists are inscribed on the insides of the arms). The legs are spindly. Yet, the inadequacies of the toy don't really seem to be the main reason why Wheelie is so disliked by so many. Mostly, it all boils down to the character's gimmick of saying everything in rhyme. I'm not sure what it is about rhyme that sets people on edge, but I see it elsewhere (just ask the old time radio community how they feel about the character of "Poco" on the old Superman radio series). I think that those who write stories for children intend for such rhymes to be appealing to children, and I'll readily confess that I myself never found Wheelie so irritating as a child (although I did avoid picking up the toy until much later, as it was so obviously pathetic even then). That said, as an adult, I definitely recommend taking Wheelie's rhymes in small doses, and recommend against trying to emulate his rhyming speech if you're trying to write for the character. Getting rhymes right, and getting the rhythm of the couplets correct, is actually pretty hard, and it seems to me that people fail miserably at it much more often than not. Better off to avoid this trap altogether.
Posted by Mark Baker-Wright at 7:00 AM