Over the past few years, the Masterpiece line has been the place Transformers fans look to supply the most definitive versions of iconic characters, and last year's Ultra Magnus release is certainly no exception. It should perhaps be noted that this isn't the only Ultra Magnus toy to bear the "Masterpiece" label. A repaint of the original Masterpiece Optimus Prime, in white, was released roughly a decade earlier. However, this Masterpiece Ultra Magnus is the first such toy with a mold created expressly to be Ultra Magnus, and as such resembles the "iconic" version of the character far more than the first Masterpiece Magnus. 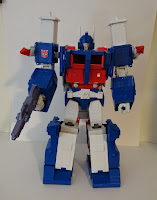 With the Fourth of July around the corner, Ultra Magnus is perhaps an appropriate choice to feature with his red, white, and blue color scheme. I wish I could say that I planned to feature him for that reason, but it really is just a coincidence.

When the character first appeared in the 1986 animated feature film, Ultra Magnus was something of a red herring. Viewers were led to believe that Magnus was to become the new leader of the Autobots after Optimus Prime's death. No doubt the vehicle mode's similarity to Prime's aided this perception. Of course, this itself was due to the face that the original toy's cab used the exact same mold as Optimus Prime's. Only the trailer was different (this is also how they could get away with the first Masterpiece Magnus being a simple repaint). While this Masterpiece Magnus toy does not use any of the same molds as Masterpiece Prime (I'm talking about the updated version of Prime now, not the original, but neither toy shares molds with Magnus), the cabs are still extremely similar at a cursory glance. It is only upon close inspection (or upon transforming the figure) that is becomes clear just how different this toy is. 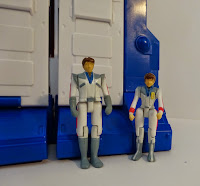 Like (the updated) Masterpiece Prime, Masterpiece Magnus comes with a small figure of Spike, but this is the "grown up" version from the third season of the cartoon, and Spike's son Daniel is included as a bit of a bonus. Both characters may be seated in Ultra Magnus' cab, and are featured in the "futuristic" garb of what the animators in the '80s thought folks in 2005 and 2006 might wear. Boy, did they get things wrong! 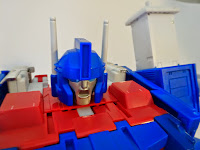 It is not uncommon for Masterpiece figures to include some kind of alternative face sculpt, allowing collectors different options with which to display their figure. This face of anguish is intended to be used with alternative fists (not pictured) as they attempt, in vain, to open the Autobot Matrix of Leadership (not included with this toy, but included with the updated Masterpiece Prime) as fans recreate a scene from the animated movie. Personally, I think Ultra Magnus looks better when he's not being made to do things he can't handle (some fans might appreciate the joke. For the rest of you, my apologies).
Posted by Mark Baker-Wright at 8:30 AM