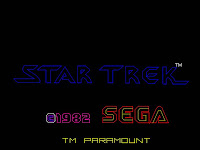 I have to confess to a bit of uncertainty about whether this month's entry really fits as a 30th anniversary. The Wikipedia article suggests that Sega didn't release this game until 1983, and for all I know, their sources may well be right. However, I'm going by the copyright date Sega included on the game itself, which places this game in 1982, and therefore as worthy of inclusion. For those who are sticklers for accuracy, and who believe that the 1983 date is indeed more accurate, I can only hope that my placing this entry toward the end of the year helps (although I have my own reasons for not featuring this game in November or December). 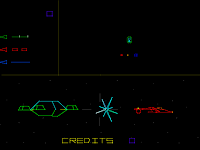 Although I will simply refer to this game as Star Trek for the sake of simplicity, the full name on the marquee is Star Trek: Strategic Operations Simulator. In case that subtitle is insufficiently clear, this game is a combat simulator, placing you in command of the Enterprise as you seek to defend a series of Starbases from the evil Klingons (yes, we know from Star Trek: The Next Generation that the Klingons aren't so much evil as they are a proud warrior race that the Federation simply found themselves on the opposite side of once upon a time. This game not only comes before these revelations, but the game makes the Klingons about as faceless an enemy as one could possibly devise. The better to shoot them to smithereens without feeling any guilt about doing so!). The three-part screen provides the player with an overhead view in the upper-right, a first-person perspective (unusual in video games of the time) at the bottom, and the upper-left showed the viewer how much of certain limited supplies or powers remained available. 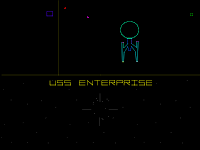 Controls and graphics for this game were both somewhat different than other games featured so far. The graphics were all vector-based, rather than using pixels to create the objects seen on the screen. Although this admittedly resulted in hollow, largely single-color images (although each distinct image could be a different color, as could separately-generated elements designed to coordinate together to form an image), this technique held the advantage of being able to create more detailed images than the more conventional bitmap displays of the time. Also, vector-based objects could be scaled much more easily, as is demonstrated in Star Trek in the opening sequence that introduces each game element. As to controls, there was no joystick in Star Trek, but rather a dial was used to spin the ship to face the appropriate direction, and a series of buttons controlled impulse power for movement, warp speed (for much faster movement, but only a limited supply), phasers with which to attack, and photon torpedoes (again a limited supply, but which could destroy all ships within the radius of a torpedo's explosion).

Although Star Trek could be found in the standard upright arcade cabinet form, truly lucky gamers had access to an arcade that had the cockpit version, designed to emulate the captain's chair on the bridge, from which you could control all of the game's functions via the dial and buttons placed in the armrests. If that wasn't enough, Star Trek features an early attempt at synthesized speech in a video game (I'm told that actual voice sampling was too memory-intensive to be viable at the time, but that sure sounds like Leonard Nimoy's voice saying "Welcome aboard, Captain!"), further helping the player to feel like he's stepped into the 23rd century, if only for a moment (and assuming that computer viewscreens of that far-flung future only had vector graphics...).
Posted by Mark Baker-Wright at 12:00 PM