Love it or hate it, the "Shattered Glass" continuity has been a mainstay of BotCon and the official Transformers club for several years now. For those who don't already know, Shattered Glass is essentially a mirror-universe take on the Transformers concept. The Autobots are evil and the Decepticons are good, instead of the other way around, as it is in every other Transformers toyline yet seen.

Most of the characters in the Shattered Glass universe are counterparts to specific Generation One characters. That is to say, Shattered Glass Cyclonus is a counterpart to Generation One Cyclonus, and not, say, to the Armada character with the same name. There are, however, a couple of exceptions. One of these is Shattered Glass Treadshot, who is not, apparently, a counterpart to the Generation One Action Master of that name, but rather draws its inspiration from a rather obscure "Battle in a Box" toy that was packaged alongside a white repaint of Armada Optimus Prime designated as "Ultra Magnus" (to make matters more confusing, the "Battle in a Box" set was packaged as part of the original Universe line, which was explicitly a multi-continuity-spanning line, and so we still have no official designation for which universe the characters represented by these original toys are supposed to come from!). 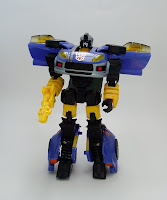 Shattered Glass Treadshot is a redeco of the Reveal the Shield Jazz toy with a new head, but I hesitate to call it a "remold" in the usual sense. At about the time Jazz was released, the folks who design Transformers toys had started to create molds with redecos already in mind, and would include a second head as a part of that process. This information became known to the public through the fact that many of the instructions for the toys would feature the other head, rather than the one actually on the toy that was released. Although Treadshot does use the head that was thus prematurely revealed, it is highly doubtful that it was actually created with Treadshot in mind (Fun Publications' design process is largely distinct from Hasbro's influence, except to the degree that Hasbro must give final approval). However, neither Hasbro nor TakaraTomy have yet to release this head on any toy other than Treadshot (despite the fact that the mold has now been used for no fewer than five distinct characters, two of which have had new heads created for them). The TFWiki has taken to calling this phenomenon a "pretool," which seems as good a term as any, although since I don't tend to use the term "retool" (however much more accurate it might be than "remold"), I might consider coining the term "premold." What do you think?
Posted by Mark Baker-Wright at 12:00 PM