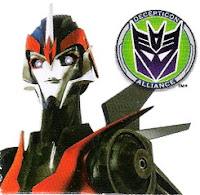 Because of the engineering expertise and multiple parts necessary to create a Transformers toy, Transformers actually tend to cost a bit more to produce than many people expect on the basis of their size compared to other toys in stores. In order to at least try to keep the actual costs buyers have to pay down, Hasbro relies fairly heavily these days on redecos (also often called repaints). While I've argued in the past that there have always been such redecos in the line (and, in fact, the entire Transformers franchise owes its existence to the concept, as the original line was actually nothing more than reuse and redecos of toys created for entirely different lines in Japan), they have not always been as common in the past as they are now. These days, it is rare to see a mold that does not get reused at least once, if not more, by changing the color scheme around and possibly remolding a part or two. 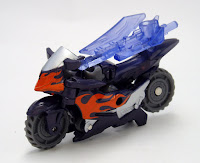 Many redecos are original concepts in and of themselves, while others draw inspiration from a variety of sources. Once in a blue moon, a toy comes along that clearly draws its inspiration from something originally done for one of the Transformers conventions, such as the Universe Skywarp toy from nearly a decade ago. The recent Decepticon Flamewar figure, part of the "Cyberverse" sub-line of smaller Transformers figures, is another such example. The original Flamewar toy was a part of BotCon 2005, the very first convention run by Fun Publications, and was the free incentive figure given only to those who attended the convention and also purchased the box set of exclusive toys that year. It is very hard to find these days (an eBay search yielded no relevant results), and can go for a pretty high price if and when one is found (easily upwards of $150, which is pretty high for a mold that would have gone for around $7 if the toy had been produced for retail). Like that convention exclusive, this version of Flamewar is a redeco of an Arcee figure. But unlike that one, which was never intended for a mass audience, this Flamewar is readily available at most toy stores today! 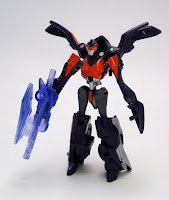 Admittedly, there has been some obvious inflation in prices since 2005. Although, being a "Legion" class Cyberverse toy, this Flamewar is considerably smaller than the Scout-class toy from the Energon line that inspired it, $7 is perhaps a low price to pay for it (some toy stores are starting to charge as much as $10 for it, but this is thankfully not yet the norm). However, I would still recommend it. Not only does this provide a cheap alternative when compared to the $150+ BotCon exclusive, but this Cyberverse toy has a remarkably detailed transformation given its size. In fact, I'm starting to shift my new Transformer buying somewhat, buying fewer and fewer of the once-standard "Deluxe" size, and more and more of the smaller toys from the Cyberverse sub-line. Larger toys, these days, tend to be exclusives or otherwise special, especially in an era where the shelves are so clogged with Bumblebees that it can be hard to find something distinctive. But I'll have more to say about that kind of thing at another time....
Posted by Mark Baker-Wright at 10:00 AM