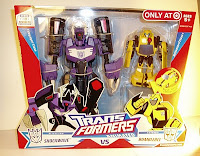 Often, when a new Transformers toy comes out--especially if that toy shares a name with a classic Transformers character from the past--it seems inevitable that a recolor of that toy will come out in colors that more closely homage the new character's namesake.  For this reason, when the first toy representing the Transformers Animated incarnation of Shockwave was released in gray, it was pretty much a foregone conclusion that a purple version would be forthcoming.  It is also increasingly the case that these "homage redecos" tend to be retail chain exclusives.  As the sticker in the upper right-hand corner indicates, the purple Animated Shockwave came from Target. 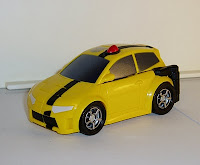 Shockwave didn't come alone, of course.  The set also came with the small "Activators" toy of Animated Bumblebee.  Filling the slot once called "Basics" or "Scouts" in previous lines, "Activators" were small toys with button-activated transformations.  See that red button on the top of Bumblebee's vehicle mode?  Push down on that, and the toy pops open to reveal Bumblebee's robot mode.  You may need to adjust the limbs somewhat to reach your desired pose, of course. 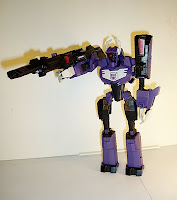 But let's be honest.  Bumblebee's just an extra.  People bought this set because of the purple Shockwave.  Shockwave's robot mode, while being a clearly different character than his Generation One namesake, clearly evokes the original version with the "ears" and the single eye in the middle of an otherwise blank face (to say nothing of the purple color!).

Animated Shockwave's alternate mode, on the other hand, bears no resemblance whatsoever to the distinctive "space gun" that Generation One Shockwave turned into.  But this can perhaps be forgiven once it is realized that Animated Shockwave is a character who, like Punch/Counterpunch (full review to come in a few months!), has distinct modes for both a Decepticon and an Autobot identity!

Shockwave's alternate robot mode goes by the Autobot alias of "Longarm" (or "Longarm Prime" in the cartoon itself, although this appears nowhere on the toy packaging).  The engineers really did a pretty remarkable job here, changing the toy's face, shoulders, hands, legs, height, and so on to create a new robot form that really could easily be taken for a totally different character (although this is definitely where the original toy's gray made for perhaps a more believable Autobot form than this toy's purple does.  Seriously, there just haven't been very many purple Autobots--if any--in the 25+ years of the Transformers franchise.  I won't say there have never been any, but I can't think of one off the top of my head).

Unlike Punch/Counterpunch, who had only one vehicle mode between the two forms (I can only assume that he didn't transform very much while on spy missions, because I'm sure that having the same alternate mode would have made it difficult to maintain the pretense of secrecy for long...), Longarm even has a distinct (and appropriate) alternate mode!  While it's probably fair to say that the toy's alternate modes sacrifice something for the gimmick of having so many distinctive transformations, this really is a pretty impressive achievement!

A discussion of this set would hardly be complete without mentioning an oddity of the set's retail history.  This set was released at the same time as another Target exclusive (Sunstorm and Activators Ratchet).  Each set retailed for about $25.  Not at all a bad price, considering what you were getting.  However, after only being on the shelves for a short while, a glitch in Target's computer system caused these sets to come up as selling for a mere $5 for several days.  This glitch apparently affected all Target's across the country, and thus Transformers fans from all over made a mad scramble to pick up the toys for this dirt-cheap price before Target could fix the error.  Now, to be fair to Transformers fans, this wasn't strictly a bunch of less-than-honest fans being opportunistic.  Target has a long-known tendency to clearance their exclusive toys after a surprisingly short time on the shelves, because the toys are apparently intended to be sold during a fairly limited window of time, after which Target is anxious to clear them off the shelves so that they can sell new product.  Although the $5 price showed up a bit quicker, and with a bit steeper reduction, than had previously been known, that Target would have done such a thing on purpose was by no means beyond the realm of possibility.  Even so, Target no doubt lost a fair bit of money that they would have gotten had the error not happened as it did, and it seems probable that someone lost their job over it.  I hope that's not actually true, but it's that kind of large-scale foul-up that tends to cause heads to roll.

But, what's done is done, and because so many fans did manage to get these toys so cheaply, you can probably find them on eBay for a pretty low price even now.
Posted by Mark Baker-Wright at 12:00 AM