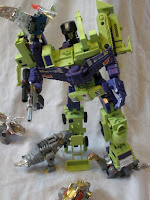 Of all of the unofficial products (and it seems that there are more and more all the time) being made for Transformers, some of the more interesting to come around in recent times come from the appropriately-named CrazyDevy.com.  Basically, these guys have created parts that can be fitted to the Generation One Constructicons to not only potentially replace easily lost combiner parts, but to even give added articulation to what used to be a fairly static combined mode.  For example, check out this pose where Devastator is attacked from all sides by the (also unofficial) WST Dinorobots.  You can't do that with Devastator's original parts (by the way, images in this entry were all taken by my brother, Nick Wright, who is the one who shelled out the money for these parts)! 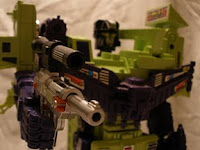 Devastator was, of course, the very first combiner robot released as part of the Transformers franchise, and it still remains one of the most popular (which is part of why this character itself has been revisited so many times).  But one of the most common complaints about combined robots (and especially the early ones) is that they simply don't have very good articulation.  Now, thanks to the combination of advances in toy technology and the more widespread availability of that tech to fans, it is now possible to rectify that failing. 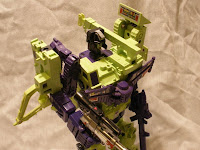 Now, there are actually a lot of different parts one can buy (and for other combiners, too!), although at around $30 for each, I doubt that even the CrazyDevy folks really expect very many fans to get all of them.  My brother has just invested in the movable thighs and articulated hands.  He liked the idea of the ball joint neck, but didn't care for the appearance of the actual head it came with.  If only CrazyDevy did the ball joint neck with the regular head, I'm pretty sure they would have made another sale!
Posted by Mark Baker-Wright at 12:00 AM