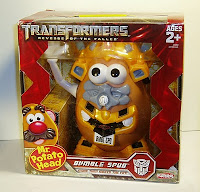 One of the many Transformers message boards I frequent is TFW2005.  A few weeks back, Hasbro donated a couple of toys to them to give away to some lucky board members, and so TFW2005 had a contest, and I was fortunate enough to become the winner of "Bumble Spud," a Mr. Potato Head toy with parts resembling the live-action movie version of Bumblebee. 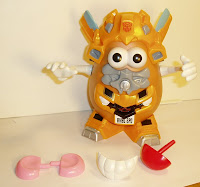 Basically, we were asked to answer this question: "How would Sam's interaction with Bumblebee been different in the two movies if instead of Sam getting his first car, he got a transforming potato?"

Here's my response, which was apparently judged as "funniest or most creative":

Upon seeing the baked potato Sam's well-meaning (but incredibly stupid) mother had given him for dinner transform into a miniature robot, Sam nearly jumped out of his seat. Although both parents looked up at Sam's cry, both seemed oblivious to the walking piece of food now standing upon the dinner table. Sam asked to be excused, and upon rushing to the next room to get some air, Sam saw that the robot was following him around wherever he went. "You're not crazy" the food-bot said aloud. "I had our chief medical potato give both of your parents a mild sedative earlier so that they would remain unaware of our conversation. I need your help to retrieve an artifact of great importance to my entire race: the Allspud!"

Sam merely stared at the tiny robot in disbelief. "I don't know what you're talking about, and more to the point, I don't care." With that, Sam raised his foot in the air, and with one not-entirely clean motion, squashed the potatobot into mash.

Sam's food never dared to speak to him again. 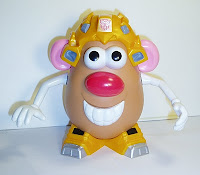 Anyway, my Bumble Spud arrived in the mail yesterday.  If you're familiar with the Mr. Potato Head concept, you pretty much know what to expect with this toy.  It's got various parts that can be removed and either swapped out with other parts, or perhaps placed on other portions of the toy altogether, so if you want to give your Mr. Potato Head an arm where his ear should be, you're welcome to give that a try.  Me?  I thought it was enough to "transform" Bumble Spud's robotic face into something more closely resembling a "normal" Mr. Potato Head form.

Because you really can't attach all the parts that come with the toy all at once, it's a good thing that they also give you a space to store all those parts, but it's probably best not to think too hard about the implications of this location and how Mr. Potato Head pulls things out of here.... ;) 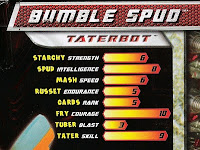 The packaging of Bumble Spud uses essentially the same design motif used for mainstream Transformers: Revenge of the Fallen toys, although it does parody some of those concepts and have fun with them.  Instead of calling Bumble Spud an "Autobot," for example, he's a "Taterbot," and the package proudly proclaims that Bumble Spud is "More Then (sic) Meets the Fry!"  Bumble Spud is even given Tech Specs on the back of the box, although each statistic is given an additional (seemingly random) potato-themed modifier (I don't actually know how these numbers match up with the "real" Bumblebee).

All in all, this toy will make a fun addition to my office shelf, and I want to thank TFW2005 for sending it to me!
Posted by Mark Baker-Wright at 12:00 AM