Weekly Twittercast: "You Bet Your Life" 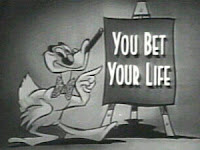 Game shows have been a part of American culture for a rather long time.  Thanks to the fact that so many older programs, especially those made for radio before the 1970's, have fallen into the Public Domain, it is relatively easy to enjoy some of these pieces of game show history even today. 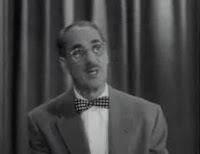 You Bet Your Life was a game show that was more about the "show" than the "game" part.  Premiering on radio in 1947, and eventually being broadcast on both radio and television in 1950 (indeed, the very same episodes aired in both media, thanks to the simple format), the show starred movie legend Groucho Marx.  Groucho had a skill for improvisation that was unmatched, and many of the Marx brothers most famous comedies were largely ad-libbed.  This skill was put to good use on You Bet Your Life, which featured Groucho and three pairs of contestants in each show.  The contestants were often (but not always) selected from the studio audience, and often were not people who knew each other, but who fit "categories" requested by the producers.  One pair, for example, featured a "hobo" alongside a "job analyst."  Groucho and the couple would chat for a few minutes, before eventually playing the perfunctory game, whereby the contestants would answer a series of questions, betting a portion of their existing winnings (starting with $20, at least in the earliest episodes) to try to accumulate the highest total at the end of four questions.  The couple with the highest total then attempted to answer a single question at the end of the show for an escalating jackpot (starting at $1000).

A highlight of the show was the "secret word."  Always a very common word, the idea was that if the couple should say the word during the course of their conversation with Groucho at any point during the episode, they would win an additional cash prize of $100 (I can't tell that this ever changed).

Although cash prizes were given away, there was no mistaking that this show was really about the humor that would come from Groucho's conversations with the contestants.  For example, while interviewing a couple that had been married for 50 years, Groucho and the husband (obviously retired at 77 years old) had this exchange:

Other game shows have been known as much for the humor they generated as they have been for big cash prizes.  The 1970's classic Match Game, for example, would never have been a hit if not for the antics of the celebrities and the double-entendre jokes (mild by modern standards.  In fact, this is why some suggest that the show couldn't work today.  I disagree, but do feel that the more recent attempts to revive Match Game didn't understand that there is a boundary between what's funny what's going too far into the risque) often tossed in.

Over the past couple of weeks, I've started something of an experiment with my Twitter account.  Every Monday night, at 8:00 pm (Eastern Daylight Time, 5:00 pm Pacific), I am posting an MP3 link to the episode of You Bet Your Life that originally aired exactly 60 years previously.  A "Twittercast," if you will.  I am already prepared with "anniversary" episodes for the next month or so, but of course I may not have existing episodes to do this indefinitely (at least, not while retaining the "60th anniversary" element).  Still, I think that this is could be an interesting experiment in reliving a moment of broadcast history.  If you'd like to keep up-to-date when a new 60th anniversary episode of You Bet Your Life is made available, feel free to subscribe to my Twitter account @NicodemusLegend.
Posted by Mark Baker-Wright at 12:00 AM