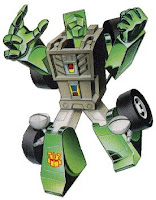 While Transformers fans are anxiously awaiting the chance to pre-register for BotCon 2010 (or, alternatively, to order one of the non-attendee sets of toys), "Generation Two" is all over the place (well, all over Transformers-related places, anyway).  In that spirit, it's time to do a bit of G2-focus over here, too.

When Hasbro first brought Transformers back from near-extinction at the end of 1992, the only toys on the shelves were repaints or redecos of toys from the original line (a few toys originally produced for the European market were already on the way, but weren't part of the first wave).  Among these were the G2 Mini Vehicles.  I've done a feature on Bumblebee already, but here is the entire set of G2 Mini Vehicles.  From left to right, this is Seaspray, Hubcap, Bumblebee, and Beachcomber done up in the vacuum-metalized paint that makes them distinct from the G1 versions.

In a broad stroke, the G2 versions kinda-sorta retain the basic colors of the G1 originals, only shinier.  Hubcap is the most blatant exception, with the original version having been yellow.  Red was actually Cliffjumper's color, and since Hubcap is a Cliffjumper remold with only a couple of subtle changes from Cliffjumper, a lot of fans think that this is G2 Cliffjumper.  But the mold is unmistakably the Hubcap version if you know what the differences are (the head is the most obvious giveaway).  Cliffjumper just can't catch a break....  Beachcomber's only really the same color if you squint, since green really is different than Beachcomber's original blue, if arguably the colors are right next to each other on the color wheel (and the original never had anything like those orange highlights!).  Further muddying the waters is the claim that some fans make about a rare "purple" variant of G2 Seaspray, but the prevailing wisdom is that this is just a result of natural differences between batches of the blue chrome, and not a true variation.

Subscribers to my Twitter account will be greeted with a new link to some G2 goodness every day for the next week or two.  Some links will be old features from this blog, while others will be new images of G2 toys not yet featured here.  Enjoy!
Posted by Mark Baker-Wright at 12:00 AM