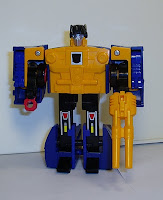 Since the people at Fun Publications have officially announced that the theme of this year's BotCon will be "Generation Two: Redux," members of the official Transformers club (often concerned that FP forgets about them in favor of convention matters) are getting anxious to know when pre-orders of the non-convention exclusives will finally begin.  I've already decided that I'm going to hold off on a full feature on the original version of the "Doublespy" toy (often referred to as Punch/Counterpunch after the names of its two robot modes) until after the new club version comes out in a few months, at which time I can compare the two.  In the meantime, a design oddity of the original toy will make for a bit of a teaser.

Punch, as you see him in the picture to the left, is not transformed according to the toy's instructions.  Basically, what you're seeing is the robot mode as the toy was designed to be transformed.  Although the toy's proportions are a bit... "off" when done this way (and a view of the robot from the side makes it look like he's standing on his knees!), this form's height is certainly in keeping with most of the Autobot cars of the first couple of years of the Transformers line.  By being shorter than Counterpunch's robot mode, the visual differences between the two modes are increased. 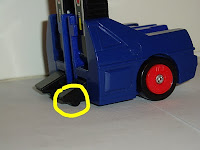 How can we tell that the toy was designed to be transformed this way?  Perhaps the most obvious cues are the two round nubs that are on the bottom of the black feet that are used in this robot mode.  The nubs aren't used in any of the official transformations, and would be normally expected to remain flat for purely aesthetic reasons in Counterpunch's robot mode, where they sit on top of the feet.  In this "dwarf" transformation, however, they are exactly the right height to lend support to the bottom of Punch's robot mode.

However, it seems just as clear that, by the time the stickers were designed for the figure, the decision had already been made to transform Punch in the now-traditional way, in which the legs are essentially just Counterpunch's legs seen from the other side.  I'll demonstrate this when I feature the figure more fully when the new one comes out in July or so.
Posted by Mark Baker-Wright at 12:00 AM