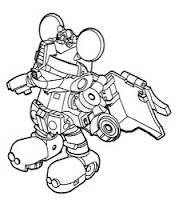 OK, so I'm being more than a little silly.  But who could have imagined that there would someday be an official fully-Disney-licensed Transformer toy?  Sure, we might have expected that Disney might have gotten into the transformable robots craze, but an actual Transformer?  I'm still amazed that this thing exists! 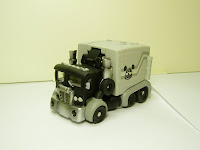 This toy, released earlier this year, is only available from Japan.  Apparently, Disney made a licensing agreement with TakaraTomy, but not Hasbro, which still insists that a release of this toy in the states isn't going to happen.  Too bad.  It would be a perfect companion to the Disney-character Star Wars figures and Mickey Mouse as Indiana Jones figures that you can currently get at Disneyland and other Disney theme parks.

Like the Star Wars Transformers, this toy isn't actually supposed to be Mickey Mouse, but rather represents a mecha that resembles Mickey, which is piloted by the "real" character, who is depicted on top of the robot's head.  The transformation features a gimmick whereby this figure is hidden in vehicle mode, while completing the final step in changing the toy into vehicle mode causes a Mickey figure (hidden in mecha mode) to be revealed behind the steering wheel of the vehicle (drivers are on the opposite side of vehicles in Japan vs. the United States).

I got the monochrome version.  I'm not sure that I can explain why.  The full color version is clearly more popular.  I just felt that the monochrome version was more of a conversation piece, somehow.  It's one of a small handful of toys I keep in my office at work, rather than at home where no one but me will ever see it.

Apparently the Mickey Mouse Transformer sold pretty well.  At least, it did well enough that plans have already been announced for a Donald Duck Transformer to be released next year.  I'm looking forward to getting that one, too.
Posted by Mark Baker-Wright at 12:00 AM