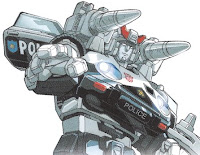 Way back in 1984, when I was still in elementary school, Prowl may have been the very first Transformer our family ever picked up (I can't really recall if we got Prowl or Bumblebee first). My brother still has that Prowl, but the toy's definitely seen better days, and I still recall with horror the time when the family babysitter accidentally snapped the roof right off of Prowl in front of our eyes. A traumatic experience for any Transformers fan (and, from what I can tell, one similarly shared by most fans who owned either Prowl or Bluestreak...). 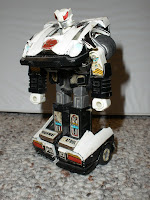 That old Prowl looks pretty depressed now. Other parts have long-since been broken off, and the whole thing barely holds together any more. Here are other pictures, where you can see both modes from various angles. Needless to say, although that Prowl is a toy both my brother and I remember fondly, and wouldn't dream of selling (as if we could get any money for that wreck!), we both have since gotten specimens that aren't in such sad shape. My brother's is another G1 original, but I snatched up the reissue when it came out a few years ago. 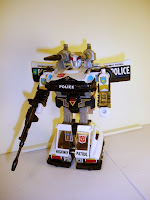 Although my reissue Prowl certainly looks more confident and powerful, a quick glance will tell the astute observer that this is indeed a reissue, and not only that, but that this is the Hasbro reissue, and not the Takara version. The big giveaway is the fact that the rifle and missiles are black, rather than chromed plastic. Apparently, because of the size of the missiles and rifle, Hasbro opted to go with a more flexible plastic this time around, so as to minimize the potential for child injury. Unfortunately, this flexible type of plastic doesn't adhere to chrome, and so the weapons are left colorless. 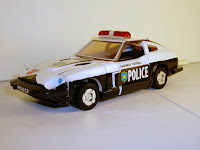 Prowl has become rather iconic as transforming into a police car, even though it was by no means common for the Datsun Fairlady Z to be used as a police car in America (Fairlady Z's were apparently used as police cars in Japan, though). This has led to quite a few other police car Transformers over the years being called "Prowl."

The name "Prowl" hasn't been limited to police car Transformers, though, and has been used on quite a number of unrelated (and at least one questionably related) characters, arguably being one of the most "misused" names in the entire Transformers franchise. However, this is the price of maintaining trademarks. If a toy company doesn't keep a name in use, they risk losing the rights to use that name. This problem is even more likely to be an issue if the name is a common word, such as "Prowl." By using the name "Prowl" on lots of different toys, they ensure that reissues like this one can still be called "Prowl," rather than something else entirely. Most fans have come to accept this as a fact of life.
Posted by Mark Baker-Wright at 12:00 AM