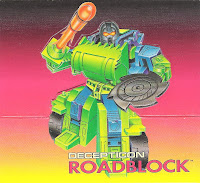 From time to time, Hasbro and/or Takara have experimented with Transformers that have some kind of auto-transforming feature. Although it can be a fun and interesting gimmick, it often leads to robot and/or vehicle modes that are fairly simplistic. This was definitely the case with the Jumpstarters and the Battlechargers in Generation One (the latter of which had no posable limbs whatsoever!). 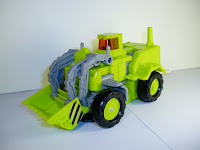 For Generation Two, Hasbro's attempts at auto-transforming Transformers were the Auto Rollers (who, perhaps ironically, were actually Decepticons). Roadblock was one of two Auto Rollers that were actually sold at retail, the other being Dirtbag. There were other Auto Rollers planned and advertised, but these were never mass produced. Both Roadblock and Dirtbag were construction vehicles in what has since been colloquially called "Constructicon Green." However, they are not Constructicons, but all new characters (there was a Generation One Roadblock, but the Tech Specs for the two Roadblocks share little in common, indicating unrelated characters. This kind of thing would become much more common as the years moved on). 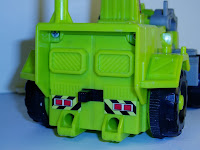 Unlike the Jumpstarters and Battlechargers, which both featured pull-back motors and auto-transformed as they raced across the floor, the Auto Rollers featured a switch in back. When the switch is to the left, as seen here, the vehicle will roll freely along the floor. When the switch is moved to the right, pushing the vehicle forward will activate the auto-transform into robot mode. Pulling the robot mode backwards with the switch to the right auto-transforms the toy back into vehicle mode (assuming the arms are put in the proper position first, at least). This makes the Auto Roller gimmick the first auto-transform gimmick that works in both directions, since previous such gimmicks only auto-transformed into robot mode. You still had to return the toy to vehicle mode manually. 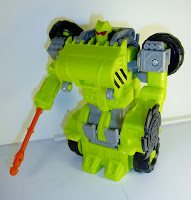 Roadblock's robot mode, frankly, isn't particularly impressive, but I've always been biased against Transformers with no discernible hands. The buzzsaw on Roadblock's left wrist does spin when a lever's pushed, and the missile in Roadblock's right arm will fire when a button is pressed, but I'd much rather the toy had actual hands! Ah, well. I guess one can't have everything. The arms still provide better articulation than the Battlechargers ever had, even if the legs remain eternally fused-together. 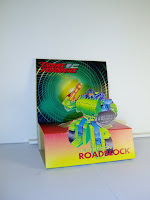 The Auto Rollers were notable for one other "extra." For a brief time, Hasbro experimented with "pop-up" bio cards, and Roadblock was one of the very first toys to be packaged with one. The feature was pretty short-lived, though. Only five toys: the two Auto Rollers, two Laser Cycle toys, and Laser Optimus Prime, were actually sold with these cards.
Posted by Mark Baker-Wright at 12:00 AM