After the Beast Wars line injected new life in the Transformers franchise, Kenner (the subsidiary of Hasbro charged with selling Transformers at the time) found themselves with a few unused small vehicle-type molds, created for Generation Two, and presumably wanted to find a way to make some money off of them. Using each of those molds two times apiece, and bringing over a few molds that were previously used only in the European market, Kenner arranged for a line of vehicle-mold toys to be sold exclusively through KB Toys (*sigh*) in 1997. This was the Machine Wars line. 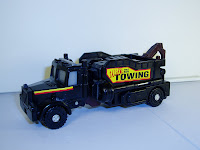 Hoist's Tech Specs bio suggests that he's intended to be the same character as the Generation One version, and the vehicle mode, being another kind of tow truck, would seem to be consistent with this. It's certainly a far more organic match than Hubcap, which is the other Machine Wars toy to share this mold, although to be fair, the Tech Specs bio on Machine Wars Hubcap does not seem to indicate that he's the same entity as Generation One Hubcap. Pretty much all the two Hubcaps have in common is a yellow color scheme. 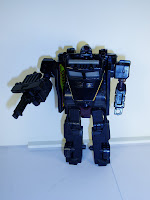 Transformation for all of the small Machine Wars robots is essentially the same. Flip the front end down (with the aid of a lever in back, in the case of Hoist), and the toy essentially unfolds into robot mode on its own (although not quite as dramatically as toys such as G2 Roadblock). Pretty much all of the smaller Beast Wars toys of this era transformed in this way as well, and fans have taken to calling toys of this transformation style "flipchangers." In the case of Hoist, there's technically one more step: remove the grille from the front of the vehicle, which can then become the robot's weapon. Honestly, though, I often ignore this step. The robot transforms just fine if you leave the grille in place, and I don't always want Hoist to be holding a weapon. On the other hand, I do appreciate this trend, which could be argued to have started with these very designs, (although the Beast Wars toys were actually released first), of incorporating all of the parts (weapons and all) into both modes in some way, so that there are no parts left over. It certainly makes keeping track of everything easier!

One further note should be made about the Machine Wars character art, especially since I've started including such art in these features. Most of the Machine Wars art wasn't created for these toys at all, but in fact reused art for completely unrelated toys, retouched just enough to kinda-sorta resemble the new toy. In some cases, such as with Machine Wars Mirage, the result is pretty laughable (the face, for example, isn't remotely right), but Hoist didn't fare so badly. In fact, Hoist seems to be the only one in the entire Machine Wars line (well, Hoist and Hubcap, I guess, since the art's just recolored, too) who got art specially made for the toy actually in the package!
Posted by Mark Baker-Wright at 12:00 AM