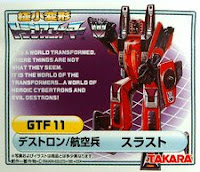 In 2003, Takara developed a new line of Transformers designed to take advantage of the ever-present popularity of the Generation One characters. This line is referred to by fans as "World's Smallest Transformers" (the TFWiki indicates that this name is erroneous, preferring "Smallest Transforming Transformers," but I have to admit that I've never heard that phrase, and since we're talking about a translation from the Japanese anyway, I'm going to defer to widespread use over strict accuracy just this once. However, instead of writing out "World's Smallest Transformers" each time, I'll just use "WST" hereafter). These figures were sold blindpacked, meaning that you actually didn't know what toy you were getting until you actually opened the box. This is a strange concept to most Americans, but is actually fairly common on such small items in Japan. Still, if one thinks of these figures as being sold similar to how trading cards are sold, and how people will buy up multiple packs hoping to get a particularly rare card, you've got the concept pretty well. 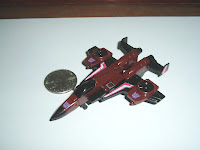 WST Thrust is not one of the rare figures, but rather is a figure you're likely to get lots and lots of copies of if you buy boxes of WSTs hoping to find a less common one (say, Jazz or Bluestreak, for example). This toy is, basically, a scaled-down version of the Generation One original (as, indeed, are all WSTs). Thrust's modified F-15 fighter jet mode is shown here alongside a quarter to give you an idea of just how small this toy is. I should note, for the sake of accuracy, that the square "heat sticker" seen on the figure isn't something that the toy came with originally, but rather is something I bought from Reprolabels to evoke the idea of a "small version of the G1 toy" even more. 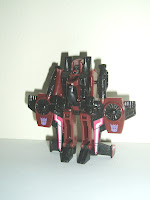 Thrust transforms almost exactly the same as his larger-scale counterpart, although the WST toys tend to rely on pegs rather than screws and such, so parts are a bit more likely to just pop off. No real harm, though. Just plug the part back in and you're good to go. Cartoon-purists often like to flip the plane's nosecone up on top of the head to give Thrust the "conehead" appearance he had back in the original cartoon, but I've never cared for that look at all. It looks pretty dippy on the cartoon, and even worse on the toys, which were simply not designed with this transformation in mind. 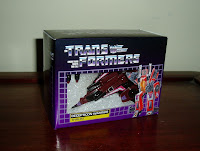 Since these toys were sold blindpacked, the box they originally came in is pretty generic, and doesn't really make for a good display item. For this reason, I decided to make my own. I've shown this box before, but here's a shot of just my custom WST Thrust box on its own. I still have the Photoshop files in case anyone would like to try their own skills, but be warned that the files are quite large, so if you have a specific character in mind, let me know when you try to contact me by e-mail, so I can send you just the most appropriate files, rather than clog your e-mail server more than necessary.
Posted by Mark Baker-Wright at 12:00 AM