For Transformers fans, BotCon has been the "big thing" in terms of conventions for over a decade, but for fans of science fiction franchises in general, the annual San Diego Comic-Con is much, much bigger. Well over 100,000 people attend over the course of a given year's festivities, whereas BotCon only regularly started breaking the 1,000 attendee point fairly recently. 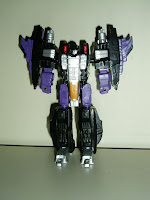 As with BotCon, one can find a lot of exclusive merchandise at Comic-Con, but Transformers exclusives through Comic-Con are a fairly recent development. This version of Skywarp is the first, to the best of my knowledge. Standing at just over 3 inches tall, it was actually given away for free to attendees who stopped by the Hasbro booth. Skywarp is a redeco of the "Legends" version of Cybertron Starscream. 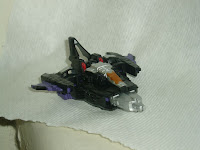 Skywarp turns into a Cybertronian aircraft, based on the "War Within" design for Starscream, which itself was based on the "tetrajet" type of aircraft that Starcream-type robots used while on the planet Cybertron in the original G1 cartoon series. 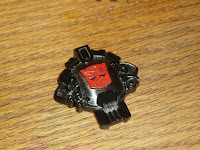 As part of the Comic-Con promotion, Skywarp also came with a unique "Cyber Planet Key," which didn't actually do anything for the toy itself (it's nearly half as large as the whole robot!), but has a code on back that unlocked a "sneak peak" of one of the posters that would eventually be packed in with the toys (no, I don't know why they gave us a key with an Autobot symbol on it, given that Skywarp is a Decepticon). 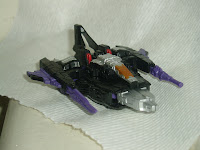 Despite the toy's small size, it has a couple of flip out weapons patterned off of the much larger "Supreme" Starscream toy. These can be deployed in either vehicle or robot mode. I don't tend to use these much, myself, but they do add an extra layer of play value to the mold.

This version of Skywarp is fairly rare, but I don't know how many copies were made, and I would certainly assume it was made in greater numbers than most current BotCon exclusives. Given it's small size, I really wouldn't recommend paying more than about $15-20 for it if you can find it on eBay.
Posted by Mark Baker-Wright at 12:00 AM