I got my 2008 Transformers club membership figure, Topspin, yesterday. Only about a week later than the first folks started to talk about getting theirs, which isn't too bad. Naturally, I had to go ahead and toss a note up here talking about it (I even had to preempt my already-planned entry for today, but since that one's time-sensitive, it's going up as an extra entry tomorrow). I even took a picture of the plastic bag the figure came in, with the figure not yet removed. Of course, this situation couldn't possibly be allowed to stand! Out it comes! 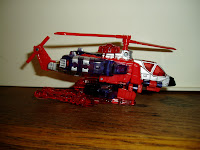 Like the previous club combiner figures, Topspin uses a fair bit of colored clear plastic. While I definitely think that this makes these figures unique and attractive, I do share the concerns of some fans that this type of plastic may not be as strong as others. I have no conclusive evidence that clear plastic is, in fact, more brittle. That's just the prevalent fan theory. But having already had a breakage incident with my Barricade figure (which uses the same mold as the upcoming final part of the club combiner, to come out one year from now), I'm not eager to see that trouble duplicated with these expensive-to-replace figures. I guess I'll just have to be careful. 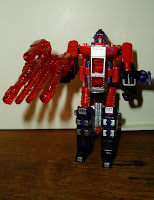 This mold is (perhaps inexplicably) my favorite of the Energon Combiner limb molds (which all of the club combiner toys have been recolored from. More on that below). I just think it manages to look nice in both modes, and has a weapon that, while not a proper hand, at least has discernible digits and a discernible thumb for the combined form. If I had my way, the club would be offering all-new fists and footstands for the combined form, but I'm not holding breath on that one. 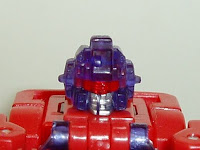 Unfortunately, my specimen seems to have a flaw. You probably can't tell in the above picture, but this close-up shows that Topspin's face has a crack in it! I can't recall whether anyone else has had this particular problem or not (or, at least, can't find the reference I think I recall, so it may have been talking about something else), but it's a disappointment nonetheless. Thankfully, I expect I'll be getting another copy from a friend of a friend, since I helped pay for his trip to BotCon.

Here are the four figures we've gotten so far, eagerly awaiting their final member (at which point I'll obviously have to find a new spot from which to display them!). 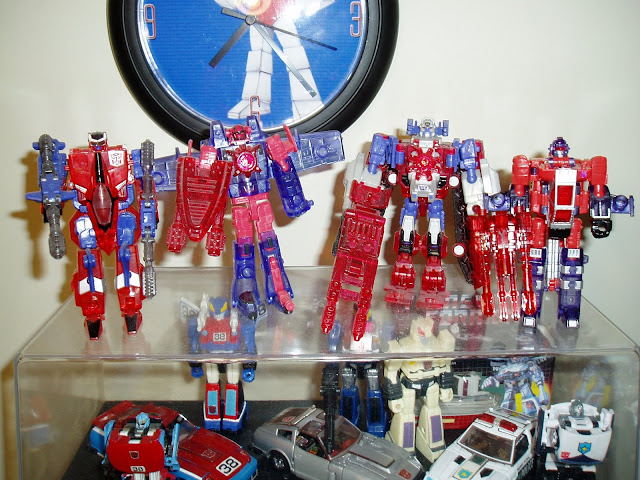