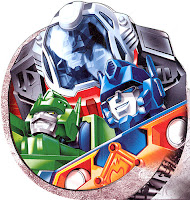 The Cybertron line is the third part of the so-called "Unicron Trilogy," but it has to be noted that it's not a very clean fit. When the Japanese counterpart to this line, called "Galaxy Force," was released, nothing within the fiction indicated a continuation with Energon or Armada at all. Yet Hasbro, for whatever reason, wanted to keep the continuity from those two lines going for just a while longer, so they made a few quickie changes and alterations to the "Galaxy Force" storyline during the stage where the cartoon was dubbed into English, and voilà! It's part of the trilogy! This is despite the fact that several characters seem not to remember key events from the previous storyline, not to mention a few other inconsistencies that we'll get to in a moment. Ahh, well. It's just for kids! Who's gonna notice? Anyway, the previous key Mini-Con trio of High Wire, Sureshock and Grindor is nowhere to be found in Cybertron, nor is any mention made of their absence. In Cybertron, the main Mini-Con trio (apparently, Hasbro decided that "3 Mini-Cons = Basic retail price point") consists of Reverb, Jolt, and Six-Speed (as pictured from left to right). The designation of Jolt, the helicopter, is one of the first obvious indicators of Cybertron's inconsistency with the rest of the "Unicron Trilogy," as this Jolt is apparently not the same character as this guy, who's also a Mini-Con who turns into a helicopter. Usually, when a name is reused within a given continuity, it's because it's supposed to be a new form for the already-existing character, but this isn't the case here. This actually isn't the first time this kind of inconsistent name-reuse happens within a continuity, but Cybertron seems especially bad about it. It happens a lot (those last two are even within the Cybertron line. You don't even need to go back to another part of the same continuity!). There's not too much more to say about these Mini-Cons themselves. Since they don't have to merge into a combined form, the designers didn't have to make the kinds of sacrifices often necessary to accommodate such additional transformations. And Jolt's and Six-Speed's robot forms are really quite decent. I find Reverb to be a bit of a disappointment, though. Although his transformation is easily the most innovative of the trio, those painted on arms (which are left exposed in vehicle mode) simply aren't all that convincing.

I've had enough of Mini-Cons for a while. Time to move on to something else....
Posted by Mark Baker-Wright at 7:00 AM