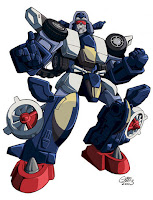 Although there is a sense in which each Transformers toyline is self-contained, it has become not-uncommon for a new toyline to have ties to the previous (or perhaps even an older) one. The Energon line is supposed to take place about a decade after Armada. It perhaps therefore makes sense that some characters from that line were brought back in all-new forms. This was the case for the Street Action Team, although they are no longer called that on their new toys' package. Instead, these new versions came out under the name of their combined form: Perceptor. Ostensibly, High Wire, Sureshock and Grindor are supposed to be "more advanced" vehicles than they were in Armada. High Wire is now a motorcycle instead of a bicycle. Sureshock is an ATV instead of a scooter, and Grindor is now some kind of hover-thingy instead of a rocket-powered skateboard. However, it seems to me that Grindor and Sureshock's color-schemes got switched around somehow. This makes properly identifying these characters a bit confusing (You may have noticed that I've switched the two around in the picture, when compared to the analogous image from last week. From left to right, those are High Wire, Grindor and Sureshock.). I consider the individual robot forms of the Energon versions of these characters at least moderately more successful than their Armada versions. High Wire now has at least one appendage that looks like an arm, and none of the robots has a face that splits right down the middle for transformation. Grindor still suffers a bit in the hand department, but all-around, these toys are a marked improvement. Even so, the best mode for these toys is, again, their combined form. In most regards, this version of the Perceptor mode is better than the Armada version, as well. It does suffer a little for having his head so far back, and therefore not properly aligned atop his own shoulders, but the Armada version had a "floating head problem," too. All in all, if you only get one version of this team, this is the one to get (not accounting for the many recolors that exist of both the Armada and Energon molds, of course).

The next toyline to come out of Hasbro, Cybertron, was also considered to be a part of the "Unicron Trilogy," but High Wire, Grindor and Sureshock did not take part. Instead, a new set of "core" Mini-Cons was introduced. I'll deal with them next week.
Posted by Mark Baker-Wright at 7:00 AM