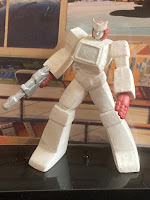 As promised, here's the second part of the fan-fiction comic I attempted to create shortly after the original Marvel Transformers comic ended, before anyone thought that Transformers might see new life via Generation Two and the lines that followed. As before, I'll use [bracketed italics] to interject a couple of "behind the scenes" comments.  (If you missed Part 1, here it is)
Transformers: A Continuation
By Mark Baker-Wright

Ratchet: I don't know. I was coming out to help you fight Megatron when, all of a sudden, I froze in my tracks. I can't move.

(Picture: Megatron [also frozen])
Megatron: No! This can't be! I will not be thwarted a victory in this way! I am Megatron!

(Picture: Fortress Maximus picking up Megatron)
Fortress Maximus: Fortunately, Megatron seems to have frozen over, as well. I'm going to put him in the Ark's brig while we revive our comrades.

(Scene change: Galvatron moving through wilderness)
Galvatron: (thought to self) No sign of that Autobot anywhere! How foolish of him to think that a simple bath could destroy the mighty Galvatron!

(Picture: Galvatron in deep thought)
Galvatron: (thought) But what was that Autobot doing on Earth anyway? I thought all of the Autobots were on Cybertron. Perhaps I should recheck the Ark and remove any Autobot scavengers trying to find out what happened to their ship.

Ratchet: Don't bet on it! Most of the Ark was destroyed by the crash. I'd barely gotten enough of these life-support systems working to give me status reports on the Autobots. The nucleon is doing all the work. If Megatron were to become mobile, he could escape easily.

(Picture: Fortress Maximus looking at readouts)
Fortress Maximus: We'll worry about him later. I see that some of the Autobots are ready to be released.

Ratchet: Yes, go ahead. But I'd rather only release a few at a time. We don't want thirty Autobots running around confused at once. Start with some of the smaller ones.

(Picture: Fortress Maximus with the recently released Autobots) [OK, I admit it. I changed this just now to preserve the suspense until the Autobots are actually introduced.]
Caption: Soon

Brawn: Hold on there, Doc. What's going, on? Where is everybody? And why are you acting like a statue?

Ratchet: Optimus Prime and the other Autobots have all left Earth for unknown reasons. Fortress Maximus was left behind and requires our help to combat a renewed Decepticon threat. As for my... condition.... It seems to be a side effect of the nucleon which revived us. Fortress Maximus and I are working on a way to reverse the process.

Huffer: What? So you mean the rest of us are going to end up frozen just like you? I think I'd rather have stayed deactivated!

Ratchet: I'm sorry, but I had no choice. Right now, Fortress Maximus is the only one who can help me, and we have reason to believe that at the Decepticons may still be at large. We hope to be able to figure out how to reactivate my motion circuits before anyone else suffers my fate.

(Picture: Huffer seems not to be listening, and is looking at the Ark around him)
Huffer: And will you look at this mess! I spend all that time fixing the Ark back up so we can fly it back to Cybertron, and what do you guys do? You crash it again! More work for me, I guess!

Fortress Maximus: I'm afraid that all of your expertise won't help this ship. The Ark is grounded for good.

(Picture: Autobots pick themselves up)
Powerglide: What was that?

Fortress Maximus: I don't know, but I'm going to find out. Autobots, come with me! Beachcomber and Windcharger, stay with Ratchet!

(Picture: Others leaving, focus on Windcharger and Beachcomber with Ratchet)
Windcharger: Figures. I just get back to operational status and already I'm being assigned the boring jobs.

(Picture: Ark shakes again)
(Picture: Beachcomber)
Beachcomber: Did I say safe? Allow me to rephrase that.

(Picture: Galvatron just outside of the Ark)
Galvatron: Autobot! I know you're in there! Are you going to come out, or do I have to go in there after you?

(Picture: Galvatron preparing to attack)
Galvatron: Did you seriously think that an ice bath was all that was required to destroy me? Foolish Autobot! You won't get the chance to make the same mistake again.

[I feel compelled to point out that, at the time I wrote this, I had not seen the Japanese Headmasters series, during which Galvatron was indeed apparently destroyed in a similar arctic bath, despite having survived the destruction of Cybertron itself earlier in the series. I still feel that being thrown in frozen water should not have destroyed a Transformer as demonstrably powerful as Galvatron when Shockwave was shown to have been thrown in a swamp back in Marvel TF US #12, yet returned only two issues later. Galvatron is TONS more powerful than Shockwave is!]

(Scene change back to Ark. Windcharger, Beachcomber & Ratchet. Ratchet is trembling, and loose plates are falling off of him.)
Beachcomber: Uh, Windcharger? What's happening to Doc Ratchet?

(Picture: Ratchet breaks out of shell. Is now an Action Master. A second picture shows off Action Master Ratchet) [I never did determine how AM Ratchet would look different than his pre-AM counterpart....]
Ratchet: No, Windcharger, I'm just fine. But we need to get to Fortress Maximus.

Ratchet (close-up): Because he needs to know that Megatron has just escaped!