While chatting on one of the Transformers message boards recently, I was reminded of a fan-comic I worked on over a decade ago, a year or two after the original Transformers comic ceased publication. To set up the context, I was a member of the Transmasters, at the time one of the only Transformers fan-groups in existence. Based largely in the UK, they had a couple of fan-comics being put together, and a "Continued Generation Two" comic that Matt Dallas put out later became rather popular.

But that was still a few years away. When I started work on my own fan-comic, the only Transmasters fan-comics I was aware of dealt with the Japanese line of toys. Generation Two did not yet exist, and Transformers fans had every reason to believe that they would never see official Transformers products ever again.

So I decided to try my hand at putting a comic together myself, explicitly taking place in the same continuity as the original Marvel (US) comic, and attempting to tie up loose ends that I felt that comic has left unattended. Through the Transmasters, I found an artist (whose name, sadly, I no longer remember*) willing to help me draw the first issue, which I received pages for. Not long after that, we both decided that other commitments needed priority. As a result, the fan comic was never actually produced.

At the time, I knew very little about copyright concerns, and trademarks, and that kind of thing. I know now, for example, that Hasbro retains the rights to all the Transformers characters and basic concepts, although they've generally been kind enough to allow fans to produce fan-fiction so long as no profit is made on such work without their consent.

But before we finally threw in the towel, I had put together scripts for four short issues. This week, I'll share some updated drafts of that work. Especially observant Transformers fans might recognize these scripts from the time I had them posted on an "Action Masters Power Plans Archive" I maintained for a few years. Although the scripts are largely unchanged, I've made some attempt to format them so that they'll be more readable this time around. I've added a few comments in bracketed italics, [like so], so that more modern readers might understand some of what I was thinking over a decade ago when I put together these rough drafts.

(As the story opens, Fortress Maximus is shown returning to the Ark after the battle with Galvatron [Marvel TF US #79]. Artist is reminded to depict Fortress Maximus with torn out eye, etc.)

Caption: He is Fortress Maximus, the Last Autobot on Earth. When the Decepticon Galvatron threatened the people of Earth, he was their only protector. Galvatron was beaten. Now, Fortress Maximus must go back to the Ark to discover what happened. 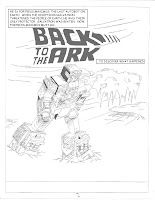 [I gave instructions to the artist to make "Back to the Ark" the title of the story, with lettering intentionally mimicking the "Back to the Future" logo. Although there was precedent for this kind of thing with comic issues titled "Buster Witwicky and the Car Wash of Doom" and "The Cure," I now believe this wasn't the smartest thing to do. Ah, well. We move on....]

(picture of Fortress Maximus's head with Spike's image [a la #79].)
Spike: Okay, so that Decepticon is gone, why do you still need me?

Fortress Maximus: I still need to investigate the Ark. After all, if one Decepticon survived the crash, so may have other Transformers.

Fortress Maximus: Whatever went on in here, it seems to be the cause of the Ark's crash landing.

Fortress Maximus (running to Ratchet's side): Ratchet! You're alive! What happened to you?

(Picture: split scenes with Ratchet trying to stop Megatron from entering portal [Marvel TF US #59], fused "Ratchet-Megatron monster" on Ark [#70], and "battle" with Starscream on Ark [#78])
Caption: Ratchet explains that he and Megatron had been fused in an accident with the trans-time dimensional portal. Later, their bodies had been separated, but their minds were still together. Starscream, having taken over the Ark with Shockwave, had tried to destroy Ratchet, but Ratchet caused him to detonate a section of the medical lab containing Nucleon, causing the Ark to crash.

Ratchet: Nucleon is a substance that restores deactivated Transformers. It must have kept us alive.

Fortress Maximus: And where are the Decepticons?

(Picture: Ratchet with image of Megatron in mind)
Ratchet: I'm not sure. I get images from Megatron. I think he's run off...disoriented. He does not know...where he is. The others must have run off elsewhere.

(Picture: Fortress Maximus with Ratchet)
Fortress Maximus: I met one of them earlier. It wasn't Megatron, Shockwave, or Starscream. I didn't recognize him. Did you see him?

(Picture: Ratchet, image of Galvatron in mind)
Ratchet: Not directly. I...sensed him through Megatron. He seemed to sense a kinship with the other Decepticon, but I never caught his name.

(Picture: Fortress Maximus) [From here on out, I'm going to forego announcing picture changes when the only purpose was to instruct the artist who to draw for dialogue purposes.]
Fortress Maximus: And the other Autobots?

Ratchet: I haven't seen any others. There may be others still in life-support.

Fortress Maximus: Well, there's one way to find out.

(Scene change: Canadian woods. Megatron wandering violently through the wilderness)
Caption: His is Megatron. Once the greatest Decepticon leader of all time. Now, he is fighting to regain his sanity.

Caption: He does not know where he is, nor does he care. He merely needs to get away from the Autobot, Ratchet, to whom his mind has been linked.

(Picture: Megatron, with image of Fortress Maximus in his mind)
Caption: Now, through the link, Megatron knows that other Autobots still exist on Earth. He must stop Ratchet and the new Autobot from reviving the other Autobots in the Ark.

(Scene change: Ark, Fortress Maximus and Ratchet inspecting life support pods)
Ratchet: This is unbelievable. There are some 20 to 30 Autobots still in stasis here. They appear unharmed by the crash. Apparently, the nucleon protected them as well.

(Picture: Ratchet, close-up on his hand)
Ratchet: Judging from these readings, they should be ready to be released in a day or so... HEY!!!

Ratchet: I don't know. My hand just... froze up all of a sudden.

(Picture: Megatron. Similar pose. Hand locked in same position as Ratchet's)
Megatron: (thought to himself) What? My hand... won't move.

(Picture: Ratchet. Similar pose. Can move hand again)
Ratchet: It's okay. I can move it now.

(Picture: Galvatron's fist comes crashing up through the ice)
(Scene change: Outside of Ark. Megatron approaches)
Caption: Some time later

Megatron: Now's my chance to rid the Earth of those accursed Autobots once and for all!!

(Scene change: Inside Ark. Ratchet and Fortress Maximus working in repair bay. Both have repaired their own damage. Ratchet looks up suddenly.)
Ratchet: Fortress Maximus! Megatron is here! He's trying to destroy us before the others can be revived!

Fortress Maximus: I'm on my way!

(Picture: Image of Spike in Fortress Maximus's mind)
Spike: And let's hope you don't get beat up quite so bad this time.

(Picture: Ratchet calling out while checking on readouts)
Ratchet: You'll need help. I'll be out just after I check on these Autobots. Even if Megatron destroys us, they must survive!

(Picture: Megatron has entered the Ark, but is still torn within himself)
Megatron: I must find Ratchet. Destroy him. End this torture that my life has become.

Fortress Maximus: (still unseen by Megatron) I do...

(Picture: Fortress Maximus fires. Megatron is thrown back against wall. Megatron prepares to retaliate)
Megatron: No! I am Megatron! I am unstoppable! No Autobot can stop me!

(Picture: Fortress Maximus gives Megatron a punch to the jaw. Ratchet can be seen approaching in the distance)
Fortress Maximus: Your days of destruction are over, Megatron!

(Picture: Megatron gets up)
Megatron: Never! You're dead, Autobot!

(Picture: Megatron prepares to hurl himself toward Fortress Maximus)
Megatron: I'll tear you limb from...

(Picture: Megatron in same pose as before. Has frozen. Another picture follows, with Megatron in the same pose.)
Megatron: What the...? What's wrong with me? I can't move!

End of Part 1
Here's Part 2
*UPDATE - March 2, 2012: It took me five years, but I've found some old records that give me the name of the artist: Matt Kuhns. I don't know if he's still active in the fandom or not, but I wanted to give him the credit he's due, and offer my apologies that it took me so long.
Posted by Mark Baker-Wright at 7:00 AM