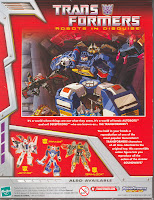 If you follow Transformers, then you probably know by now that the reissue of the original Generation One Soundwave toy is starting to show up at Toys R Us. I picked mine up this past weekend, but my brother had already received the one that he pre-ordered online about a week ago. While telling me about the toy over the phone, he noticed a couple of odd points about the packaging.

If you click on the picture to your right, you'll notice that this toy is called a "reproduction" of the original. Even more explicitly, the box says that this reissue is "identical to the original toy." 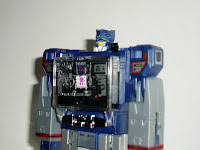 But, of course, it isn't identical to the original. In fact, no version of Soundwave has ever looked like this. The most glaring feature of this new toy not shared by any previous Soundwave is the cassette player door that makes up Soundwave's chest. As you can see by the picture on the left, the current toy has an enlarged door, capable of handling two cassettes at once.

Now, to be fair, this isn't an entirely new feature. The double-cassette door was created for a Japanese-only version of Soundwave called "Soundblaster," which came out in a darker color scheme: black where Soundwave is blue. Until now, however, "Soundwave," in the original blue color scheme, has always only been able to hold a single cassette at a time. What we have here, for the first time, is essentially Soundblaster in Soundwave colors.

A look at other parts of the package may explain some of this discrepancy. If you click on the picture on the right, you'll see a couple of oddities. First of all, the package says that you can fit "Laserbeak or Battle Ravage" (emphasis mine) into the tape deck. Next, you'll see that the door on the tape deck on the photo doesn't extend out as far as it does on the actual toy. This is how the door looked on the original Soundwave. Apparently, Hasbro had originally decided to do Soundwave in a manner more faithful to the original, able to hold only one cassette at a time.

However, even this "best of intentions" would not have made this version of Soundwave "identical to the original." If you click on this link, you'll see a picture of the original Soundwave. Pay close attention to the area immediately below the cassette door. Now, look at the cassette door on the picture from the package just above, and on the picture of the new toy just above that. Look at the bottom of the cassette door, where the hinges are. On the new version of Soundwave, whether on the actual toy, or on the "one cassette only" version of the door shown on the package, the hinges actually come out from below the door itself, on either side of the silver arrow "buttons" on the tape deck. But on the original Soundwave, that area is filled with solid plastic, the hinges being up within the door cavity itself. This is an artifact of the changes made to the mold in the late 1980's to create Soundblaster. If you look closely at the robot mode image of the Soundblaster toy (linked above), you can see the red hinges still visible below the door itself, although I admit that it's difficult to see on those pictures.

So, even if the picture on the package was an accurate depiction of the toy inside, it still wouldn't be "identical to the original." Now, you might say I'm being nitpicky, and you might even be right. But if Hasbro's going to make a promise in such strong terms on their packaging, I'd at least like for them to know what they're talking about. This is a very nice reissue of an extremely popular toy, and I highly recommend getting it if you're a Transformers fan. But it most certainly isn't "identical to the original."
Posted by Mark Baker-Wright at 7:15 AM