When the "Generations" sub-line of the Transformers franchise evolved into Combiner Wars in 2015, it represented a shift in how the franchise handled Generation One homages. Up to that point, most G1 characters were given toys that weren't really intended to be "merely" updated versions of the originals, but indeed were "reimaginings" of them. Bumblebee became a small vehicle, but not really intended to be any kind of VW Beetle, for example. Classics Megatron may have been a hand-held weapon, but bore little resemblance to the Walther P-38 of the G1 toy. As of Combiner Wars, designs tended to shift more toward the G1 model, while still adding articulation and hewing closer to animation models when possible. 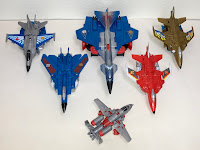 While some consider this trend a step backward, it has been a popular choice for many. That's not to say it always works that way. When the first wave of Combiner Wars Aerialbots were released, for example, Slingshot was missing entirely, replaced by a new helicopter character named "Alpha Bravo." Part of the reason for this was to maximize mold usage across the line, while still retaining variety within the individual teams. Thus, the mold to be used for both the Combaticon Vortex and the Protectobot Blades (but released before either of them!) became Alpha Bravo. Slingshot was only added later (and renamed "Quickslinger" for trademark reasons) as an online exclusive that reused the mold of teammate Firefly (a renamed Fireflight).

Once all of the Aerialbots were reunited, however, it was a natural choice to reuse those molds yet again, but in Generation 2 colors. Thus the boxset of "Generation 2" Superion came to be released (again as a nominally online exclusive), which included six toys, instead of the traditional five. These are (top row, left to right, in both this and the previous image) Skydive, Silverbolt, Quickslinger, (second row, left to right) Air Raid, Firefly, and (bottom) Powerglide (who, besides not originally being an Aerialbot, was never released in the original G2 toyline, but was given a color inverted from the character's G1 reds and greys to create a "G2" color scheme for this set). 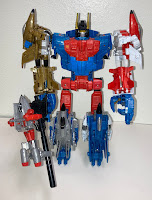 The five traditional Aerialbots combine together to form Superion, while new member Powerglide becomes a weapon in the Targetmaster vein (although, of course, this term isn't used officially these days). Powerglide's weapon can be held in Superion's hand, but I prefer to use the appropriate-sized hole in Silverbolt's weapon, creating a combined weapon for Superion (something not common during the G1 era, but seen frequently since then). Many fans argue that this is one of the best combined modes in the entire Transformers franchise, and certainly a strong start to the Combiner Wars line even when the first wave came out in traditional Aerialbot colors. The striking G2 colors (complete with G2 Autobot symbols!) add yet another dimension of fun to this set.

We'll be back on Sunday with the next episode Not Your Father's Autobot: A Transformers: Generation 2 Comic Book Podcast, discussing issue #10. Please join us!
Posted by Mark Baker-Wright at 11:00 AM