As the Generation 2 toyline moved into its third (and final, as it turned out) year, Hasbro began to quietly drop not only the "Generation 2" banner from the Transformers logo, but even the Autobot and Decepticon faction symbols from the toys themselves. While the toys were still all sold as belonging to one or the other factions, if you were to pick up a loose toy without its packaging or instructions, you could easily be forgiven for not knowing whether the character was a "good guy" or a "bad guy." That said, the color schemes will often give the astute collector a clue. In the case of Road Rocket, if you decided that the red color scheme suggested the likelihood that the character was an Autobot, you would be correct. 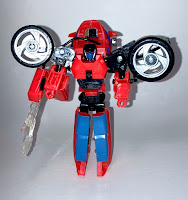 Road Rocket was one of a pair a "Laser Cycles" to be released (another pair were planned, but cancelled before they could be produced). Using a similar gimmick to the "Laser Rods" of the year before, these were motorcycles with a clear plastic part through which light would flow when you pressed a button.* While the designers had to ensure that the electronic wiring worked while allowing for transformation from motorcycle to robot mode and back again, which limits the robot's articulation somewhat, for the most part this toy is still far more posable than most toys of the Generation One era.

Whatever Road Rocket lacks in robot mode articulation, his motorcycle mode is quite solid, and even features a little kick stand to allow the motorcycle to stand upright when a child (or an adult collector!) isn't playing with the motorcycle driving down imaginary roads. The light-up gimmick still works in this mode, although seeing the rear wheel assembly glow red probably doesn't inspire as much joy as seeing the arm-mounted buzzsaw weapon in robot mode does. But don't let me stop you from having fun pressing that button on the dashboard!

As usual, this Generation 2-themed post is intended to serve as a reminder to listen to the next episode of my podcast, Not Your Father's Autobot: A Transformers: Generation 2 Comic Book Podcast. Please catch the previous episodes by clicking the link on the right-hand side of the page, and then be sure to return on Sunday when the new episode drops to hear us discuss issue #6.*I don't demonstrate the gimmick on this page, but did so when I featured Robots in Disguise Axer (which used the other Laser Cycle mold) back in 2008.
Posted by Mark Baker-Wright at 10:30 AM