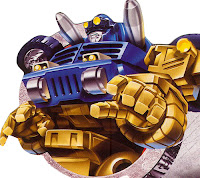 There's been a fair bit of discussion in Transformers fan circles recently about Hasbro's recent announcement that, due to rising production costs, they would be raising prices on their toys. Of course, this kind of thing really isn't new. It's just the latest chapter in a seemingly-eternal story. But it does take different forms over time. For now, we've seen a recent pattern away from smaller toys with any meaningful amount of complexity towards either larger toys or small, but very simple toys (that still likely cost $10 or more).* This got me thinking about some of the toys that we got in years past, such as Cybertron Scattorshot.

The main gimmick of the Cybertron line (for those who don't remember) was the inclusion of little discs called "Cyber Planet Keys" (seen to the left of the vehicle mode here). Each Cybertron toy came with such a key. Most keys had a code written on them that could be used on the toyline's website to unlock facts about the character or behind-the-scenes looks at the toy, but of course that site is long gone by now (although you can still find these features archived here). The feature that still works more than a decade-and-a-half later is that, when you plug the key into a special slot on the toy, it activates hidden features. In Scattorshot's case, this was a hidden missile rack (seen in the picture at the bottom of this entry. You can also see how the key is plugged in at the back).

It's really hard to imagine such small toys incorporating features like this today, but it was one way that Hasbro used to add play value for a comparatively low price. Of course, not everyone was a fan of these gimmicks, as they usually required engineering a block of the toy for the gimmick mechanism, and this often came at the expense of features like articulation, or even the transformation from one viable mode into another. I don't really think Scattorshot is particularly a victim, however, as he retains a moderately complex, if intuitive, transformation (the "sweet spot," IMHO) that retains the ability to use the Cyber Key gimmick in both modes (in robot mode, you'd just flip the block with the missile rack up behind his head before inserting the key). 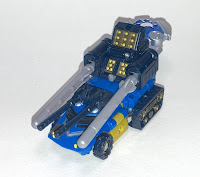 It seems to me that changes caused by inflation come in waves. Right now, Hasbro may not find it viable to do smaller toys with any level of complexity, but that doesn't mean that they never will again. If they do, however, it does mean that you can expect to pay more for it.
*It has been pointed out to me that the recent spate of Core-class figures, running at about $10, are actually quite complex. I'll have to take a mea culpa on that one, not having followed those figures except in a cursory way. I honestly thought it would take longer to get to small figures of such complexity... at any price.
Posted by Mark Baker-Wright at 10:30 AM