Last time, I featured the Fall of Cybertron versions of "the Wreckers," by featuring the toys of Impactor and Roadbuster. Let's continue this time by featuring Topspin (seen in these photos on the left) and Twin Twist (seen on the right).

As previously stated, all of the Fall of Cybertron Wreckers toys reused molds created for the Combaticons. Topspin reuses Blast Off's mold, while Twin Twist reuses Brawl's. These toys are a rather unusual confluence of intentionality and oddity. While the heads very definitely use designs previously associated with the Wrecker characters, the colors really don't resemble any color scheme these characters have ever had before, which tends to obscure the homage (I'll have a bit more to say about the colors in a bit).

Likewise, the vehicle modes, being essentially created for entirely different characters, don't really reflect the Wrecker characters all that well. It seems to me that Hasbro attempted to compensate for this oddity somewhat with the "extra" weapons given to each Wrecker character's toy. Each of these included some kind of action feature, unlike the weapons created for the original (Combaticon) versions of these molds (which are still included). Topspin's is arguably my favorite of these action weapons, deploying a spinning saw blade when a piece is pulled back, but unfortunately it doesn't translate well into a still image. Twin Twist's spinning drills are a bit more obvious, and indeed do homage the character's original toy. Indeed, without this weapon, I would definitely wonder how a character with this toy had such a name! 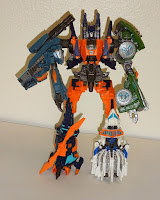 We're not done with Wrecker toys yet, but I wanted to feature the "official" version of the team's combined form now, as combined according to the instructions that come with these toys (not seen here is the combined "Phase Cannon" suggested by the instructions. Here is what that looks like). Ruination is an intriguing "intentional, but odd" homage in its own right. His head is clearly patterned after a Marvel UK character named "Emirate Xaaron," who wasn't technically a Wrecker, himself, but who was closely associated with them. Also, long-time readers may remember that there was another combined robot named Ruination back in 2001. While that Ruination was a Deception, he was also a reuse of molds originally created for the Combaticons (in that case, the original Generation One versions). This may also explain the otherwise-odd color choices for the Fall of Cybertron Wreckers. Try bringing up pictures of these two Ruinations in separate tabs and compare them (especially the limbs, which are conveniently in the same arrangement if you use the image at the top of the other Ruination's entry). While these toys use entirely different characters than the 2001 toys, the color schemes are a pretty close match! Thus we see a complicated array of homages layered on top of each other.

We'll finish out this set in two weeks.
Posted by Mark Baker-Wright at 9:00 AM