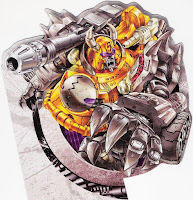 In the days leading up to the recent San Diego Comic-Con, Hasbro announced the first Transformers-related project via HasLab, their crowdfunding platform. If at least 8,000 pre-orders are made before the end of August, at $575 (plus tax) each, Hasbro will create a new version of Unicron. As befitting the legendary planet-eater, this would be the largest Transformer ever created. While this prospect has been met by great excitement within the fandom, the question of whether or not there is sufficient support for such an ambitious project has not yet been answered as of the time of this writing. It does, however, give me an opportunity to highlight the Unicron toy at the other end of the pricing spectrum. A time when Unicron didn't turn into a planet, or even a part of one. A time when Unicron was forced to stand shoulder-to-shoulder with other Transformers. The time of the Deluxe-class Unicron that came out as part of the Cybertron toyline in 2006. 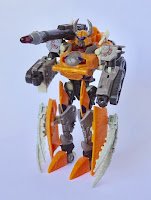 As detailed in the mini-comics that came to members of Fun Publications' Official Transformers Collectors Club at the time, although Unicron's planet-sized body had been destroyed, an essence remained which was eventually reignited when some of Unicron's followers acquired an object called the "Dead Matrix" and tossed it into a black hole called the "Unicron Singularity." One planetary destruction later, and Unicron emerged in a new body... but a tiny one (by planet-eater standards) with a skeletal face, reflecting the ordeal Unicron had endured. 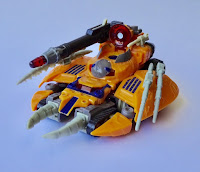 No longer large enough to transform into a planet, Unicron turns into a bizarre kind of a tank. Between the color scheme and various design elements resembling the rings and claws once visible on Unicron's planetary form, Unicron's identity remains apparent. 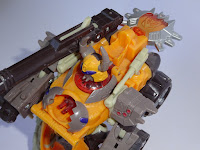 Being a part of the Cybertron toyline, this toy comes with the standard "Cyber Planet Key," which in this case, opens up a section of Unicron's chest that bears a significant resemblance to the gaping maw of Unicron's previous form. Visible just inside the open maw is a triple-canon, most likely intended as a call-back to the missile-firing chest cannon on the Unicron toy from the Armada toyline. This feature can be activated in Unicron's tank mode, as well.

I imagine that, for most people who want a Unicron toy, only a giant spherical behemoth will do, and so this decidedly smaller (if more affordable) toy almost certainly isn't for everyone. Still, it demonstrates how a little creativity can be applied to a well-known character to provide a new form for that character while remaining recognizably who it is intended to be.
Posted by Mark Baker-Wright at 9:00 AM