While TFcon is one of the most popular Transformers conventions out there (arguably even better, at least to hear some folks tell it, than BotCon was even in its prime), its unofficial status means that it has to do without official Transformers exclusives. That doesn't mean they have nothing special to offer, of course, especially not when third party companies can step up and create something special for TFcon themselves. Delta Manus was one of the exclusives that one could get at TFcon when it was in the Los Angeles area just a few months ago.

Delta Manus comes from MakeToys, one of the better-known suppliers of converting robots that homage the famous characters and concepts of the Transformers line. As is perhaps obvious, Delta Manus is an Optimus Prime-like toy. In fact, the original use of the mold, Striker Manus, was even more obviously Prime-like, with the classic red-and-blue color scheme. The blue color scheme seen here, however, pays homage to one of Optimus Prime's Diaclone forebears. Specifically, this toy utilizes the colors of the cab portion of Powered Convoy (whose trailer was ultimately the basis for Ultra Magnus, whose own cab was essentially a white Optimus Prime robot when the set was used in the Transformers line). Indeed, the name of this toy is an homage to the name given to the Diaclone-colored redeco of the Masterpiece Ultra Magnus toy: Delta Magnus. Only the letter "g" separates the two! 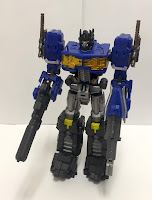 While the transformation to robot mode is somewhat more complex, and the use of the smokestacks as axe-weapons is fairly novel in my experience, the transformation of the wind vane atop the cab to a hand-held weapon leaves me with the impression of Classics Optimus Prime. This is almost certainly unintentional, and may not even be an impression shared by anyone else. Perhaps I'm subconsciously thinking of the fact that TakaraTomy released a blue repaint of the Classics Prime mold as a new character they called "Magna Convoy." I really don't know.

Perhaps the most significant aspect of this toy is the box that it comes in, which pays homage to the packaging of the original Diaclone figure from back in the 1980s. While the actual language is specific to this toy and the company that made it (MakeToys), the stylistic choices all scream out "Diaclone" to anyone with a familiarity with that packaging... which is, admittedly, a fairly small sub-section even within the Transformers fandom, so here's another link to the Powered Convoy feature on Maz's "Transformers One" blog, so you can compare the packaging featured there with Delta Manus' packaging here.
Posted by Mark Baker-Wright at 9:00 AM