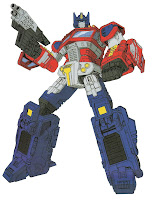 Starting around the holiday season of the year 2006, many long-time Transformers fans finally got what they'd been asking to get for more than a decade.  Finally, Hasbro truly revisited the Generation One era, giving classic characters updated forms utilizing 21st century toymaking technology.  Granted, this wasn't exactly the first time these characters had been revived since the original line ended in 1991.  The 2003 Alternators line, for example, also gave old characters new forms, but Alternators was a side-line with the stated purpose of using licensed ground vehicle forms (i.e., only cars and a few trucks).  This limitation meant that some reborn characters (such as Shockwave and Grimlock) were given forms wholly unrelated to their Generation One identities.

The Classics line, on the other hand, was more of a true "update."  While the updated Classics alternate modes were by no means identical to a character's Generation One form, they were very obviously similar.  So although Classics Optimus Prime is no longer quite as boxy as he used to be, and while he no longer comes with a transforming trailer, he's still a truck. 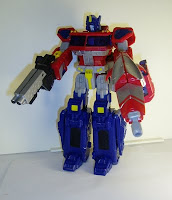 Besides having far greater articulation than toys of the '80s, updated toy tech also means that one no longer has to worry about things like detachable fists or weapons that don't have any place to go when Prime has changed into vehicle mode.  Rather, the fists are actually a part of the toy, and the weapons--as with most (but by no means all) modern Transformers--are actually created out of parts of the vehicle mode (in this case, the smokestacks and the aero fairing) that themselves "transform" into the weapons.  This is, of course, nothing new to Transformers toys themselves, but it's a first (not counting Alternators) for a Generation One Optimus Prime character toy (even "Masterpiece" Prime's weapon doesn't store in vehicle mode, much less transform into a part of it!). 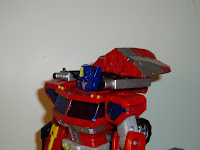 Classics Prime's weapons even combine, although I have to admit that I've never been all that happy with these "shoulder cannons," so I don't actually use this option often.

Sadly, the Classics line was only ever intended as "filler" between the end of Cybertron and the beginning of the 2007 movie-based line of toys, and so lasted for only about 8 months or so, nowhere near as long as many fans would have liked.  However, the concepts behind Classics have continued into other lines since then, and although toy stores are currently saturated with movie-based toys again (since the release of the sequel, Revenge of the Fallen), Hasbro promises to revisit these characters and concepts as long as they can be convinced that such toys will sell.
Posted by Mark Baker-Wright at 12:00 AM