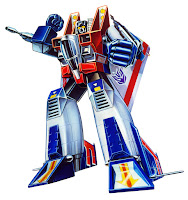 When it comes to redecos, Starscream was the original. Before it became controversial whenever a new toy used the same mold as some previously existing toy, the Transformers line was introduced in 1984 with three jets that differed only in their coloration: Starscream, Thundercracker, and Skywarp. Since Starscream is considered the leader of this trio (and is certainly the most well-known of them all), it is appropriate to consider Starscream the "original" of which the other two are redecos (even if, technically, they all came out at the same time, and thus are equally redecos of each other). 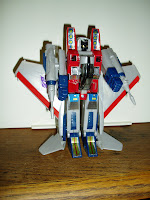 Starscream is one of the most well-known characters of the entire Transformers franchise, even having been given a new form (or two) within the original "Generation One" line itself. Perhaps this is because of his constant attempts (which nearly always failed) to overthrow Megatron as the leader of the Decepticons. Starscream was a self-aggrandizing braggart with greater ambition than ability--not that his ability was meager, by any means. He just simply doesn't have the courage to truly be a leader. One well-placed shot against him, or some poorly-planned-for turn of fortune, would send Starscream running for his life. But, for all his failures, he kept on trying. Starscream is a character you just couldn't ever keep down entirely. Even after having been destroyed by Galvatron (Megatron in his new form in 1986's Transformers: The Movie), Starscream came back as a ghost, apparently possessing a spark that could never be extinguished. 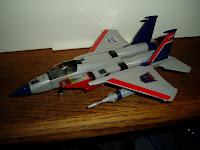 This specimen of the toy is the 2001 Japanese reissue, but is practically identical to the 1984 original. Turning into an F-15 fighter jet, this mold has been given at least twelve official redecos or remolds. I haven't researched this claim fully, but I do believe that's a record among all the molds created in the Transformers long history (And, given such a large number, it's entirely possible I've missed a few. Note that I'm not counting the 2001 reissue, being intended to be identical to the 1984 version, among these, nor am I counting any reissues intended to be identical to another existing deco.). The mold must have the same never-to-be-extinguished life span as the character it represents!
Posted by Mark Baker-Wright at 12:00 AM