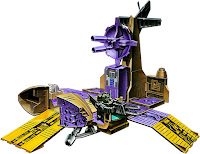 Like many who attended TFcon LA a few weeks ago, I picked up a few items to add to my collection. One such item, however, was more of a "return" to my collection, having sold my original specimen many years ago and having later come to regret it. Thus, Skyhopper, one of the Micromaster bases, is once again mine.

Skyhopper was a part of the Transformers line during an era when pretty much every toy that came out, aside from a few holdovers from the previous year, was either a Micromaster or a Pretender. Skyhopper was a jet, actually a repaint of Storm Cloud from the Air Strike Patrol (someday I should get around to covering those guys!). 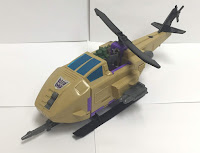 Micromasters were never sold as individuals, but came either in groups or with playsets. Skyhopper was one of the latter, coming with a helicopter. Sadly, these toys came out after the G1 cartoon had stopped making new episodes, and none of these Micromaster playsets ever appeared in the Marvel Transformers comic book, so the question of how large a helicopter this was, that it could fit even a "micro"-sized Transformer (demonstrated to be somewhat larger than a human in the Marvel comics), was never addressed. I have to assume it was larger than your average human helicopter in-fiction, though. 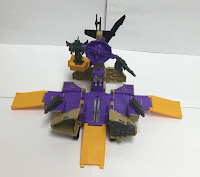 Skyhopper's helicopter turned into a battle base with ramps that could be used to attach to other Micromaster bases. Although I've always had the impression that this feature was intended to be used primarily with bases of similar size, the only option I've ever had available was Airwave. I'm pleased to report that the ramps and ports on both bases are indeed compatible with each other, although one does have to be creative to figure out ways to have Airwave's tiny airport and Skyhopper's battle base positioned near enough to each other to use the connecting ramps without the implements themselves getting in each other's way! Still, this is a fun little set, and I'm glad it's back in my collection.
Posted by Mark Baker-Wright at 9:00 AM