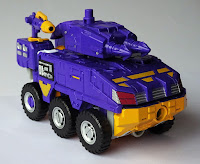 Fans who favored one of the two Double Targetmasters rightly noted that neither had been given a dedicated mold since their original toys, although both have been homaged in various repaints over the past few years. Likewise, Impactor has been homaged with a couple of repaints in recent years, with this retool of Combiner Wars Rook being only the most recent example. But whereas the Double Targetmasters had original toys back in the '80s, Impactor had never had a toy of his own back in the day, having been created for the comics published by the UK branch of Marvel Comics. I think that it was this lack of an original dedicated mold, even more than the character's admitted popularity, that pushed Impactor (oh, yeah, and Mirage) to victory. 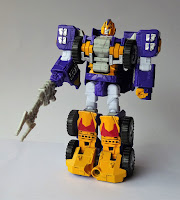 Whether the toy that will eventually come out thanks to Impactor's fan poll victory will meet expectations will have to be determined once we actually have a chance to see it (that is, for those fans not already determined to dislike it because it will be "only" a Deluxe rather than something larger, or who would have preferred another character). For now, we can talk about this Combiner Wars version. Fun Publications did a few tricks with this toy, not only giving it a specially-made head, but also leaving his right hand (which is included as part of the mold) unpainted, so that one could emulate the distinctive "harpoon hand" that the comic character had by plugging in one of the weapons the toy came with. They then went the extra mile (although you wouldn't be able to tell from this picture, which features the "clamp" weapon that came with the Rook mold) of including a set of weapons originally made for Generations Arcee, presumably reasoning that one of her swords would resemble a harpoon when plugged into Impactor's arm better than the clamp weapon does. I still like this look better.... 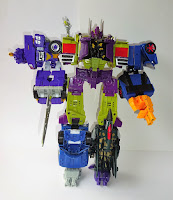 Finally, a quick word about the combiner that Impactor was slated to be a part of. Wreckage is the combined form of three of the TFSS 5.0 toys plus either Impactor and Bluestreak (the "bonus" figure from TFSS 4.0) or Alpha Bravo and Offroad (the two "extra" figures created for the Aeriabots and Stunticons that originally supplanted traditional characters Slingshot and Wildrider in Combiner Wars*). For the Impactor/Bluestreak version, Fun Publications suggested a novel use of the existing weaponry by depicting Wreckage with one hand replaced by part of the sword weapon that came with the torso robot's mold, itself homaging Impactor's harpoon hand. The unused hand/foot/gun is then repurposed as a shoulder-mounted weapon. I really enjoy it when such creative arrangements of existing features are given official sanction like that.

So, that's it for the characters featured in Hasbro's recent online poll. Recent events have caused me to alter my schedule a bit for the short term. I'll have some words to say about the now-imminent Toys R Us liquidation in a few days, after I've had a chance to gather my thoughts. Once that's done, perhaps a week or two later, I'll come back to Transformers discussion to wrap up the thoughts on Hasbro's upcoming toyline which prompted these past few posts by featuring a different toy entirely, which I think may represent Hasbro's apparent intentions... at least, based on what we know at this early point in time.
*It is recognized, of course, that toys for Slingshot and Wildrider did come out later (albeit under new names), leaving Alpha Bravo and Offroad potentially orphaned if not used as part of Wreckage.
Posted by Mark Baker-Wright at 9:00 AM