Transformers Collectors Club exclusives can be described as coming in one of three different flavors: 1) a new character, never before seen, 2) a new form for a well-known character, or 3) a reference to an obscure character or concept. I suppose one could say the same about all Transformers figures, but it remains a convenient way to discuss exclusives. Oddly enough, the Transformers Figure Subscription Service (TFSS) 5.0 Optimus Prime set actually straddles flavors 2 and 3. 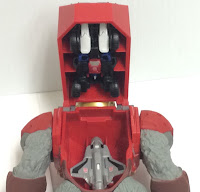 Since Optimus Prime is arguably the most well-known character in all of Transformers, the set's relation to "flavor 2" is pretty self-explanatory, but the obscure concept explored here requires some history. Back in the last days of the original line, there were apparently some plans to evolve the Pretender concept to incorporate two robots in the Pretender shell, in what were to be called "Double Pretenders." While these plans never made it to market, a couple of prototype shell designs were unveiled at BotCon 1996, although we never did learn what the inner robots for those toys would have looked like. 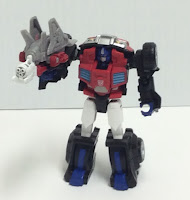 Fast forward to BotCon 2015, when Fun Publications sought to push the boundaries of what was possible with convention exclusives even beyond what they'd done the previous year with Scorponok. Taking their inspiration from one of the original Double Pretender shell prototypes, and borrowing a name given to the concept only a couple of years previously, they came up with Oilmaster, featuring an entirely new-mold Pretender shell that housed toys made from the "Thrilling 30" Swerve mold (which included not only Swerve, but a small jet named Flanker that could turn into both a robot and a weapon for Swerve).

Although the original Double Pretender shell that served as the ultimate inspiration for Oilmaster was first revealed to the world in 1996, the shell everyone saw in 1996 had a different color scheme from Oilmaster, who possessed a much darker color scheme which derived from a second version that was revealed through an anonymous collection some time later. Since this version was used when the "Oilmaster" name was attached to the concept in 2013, Fun Publications followed suit, but that meant that there was an already-known opportunity to use their newly-created Pretender shell at least one more time, this time using the red and grey color scheme originally seen in 1996. This use of the original red and grey color scheme was developed to feature in the "5.0" version of Transformers Figure Subscription Service, ultimately the last such service that Fun Publications would ever do. 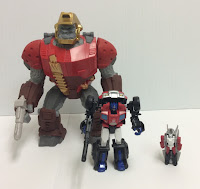 Fun Publications didn't just copy the same set of molds they'd used with Oilmaster, however. This set was given a different pair of weapons, both of which came from "Thrilling 30" toys available in 2013. The grey weapon held by the Pretender shell was recolored from Generations Orion Pax's weapon, while the smaller rifle is essentially a copy of the weapon included with the Legends-sized Optimus Prime figure of that era. Coupled with a new Optimus Prime head for the Swerve-mold inner robot, and a color scheme for the Flanker-mold to turn it into "Hi-Q," the concept of a new Optimus Prime toy, but with a gimmick never imagined for a Prime toy before, became a reality.
Posted by Mark Baker-Wright at 9:00 AM