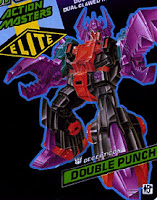 As is well-understood by nearly all Transformers fans who've ever heard of them, Action Masters were Transformers that didn't transform.

Except for the ones that did.

While 1990, the year the Action Masters were released, was the last year of the original Transformers toyline in the United States (they would return by 1993 as Generation Two), the Transformers line never stopped in other parts of the world. Notably, in Europe and parts of Australasia, Action Masters were released for a second straight year, including both repaints of molds released the previous year and totally new molds. Four of these new molds formed an Action Master sub-line: "Elites." 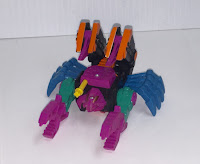 Action Master Elites were, perhaps paradoxically, Action Masters that could actually transform. The in-universe reasons for this evolution are murky, at best. Some text on the back of the Elites' packaging merely asserts that "advanced technology" allowed these characters to harness the power of Nucleon (the substance that was said to have removed the power to transform in other Action Masters) "without losing their ability to transform." These transformations were simplistic, even by "Generation One" standards. In the case of Double Punch, here, the toy is simply laid on the robot's belly with the arms pointing up, the legs are pulled back with toes flipped out, and detachable claws are moved to the sides. That's all there is to it! Pressing down on the yellow rod is apparently supposed to activate a minor mechanical play feature to make the claws move back and forth, but the gears don't connect particularly well on my specimen, and the very act of transforming the figure risks stripping them. A poor design choice, in my opinion.

Four Action Master Elites were released in total, and although all four were given original names, three of the four were clearly molded to resemble a well-known Transformer from the previous half-dozen years or so of Transformer history. Double Punch is molded to represent a Japanese character called "Black Zarak" (who himself was a remold of the original Decepticon Headmaster leader, Scorponok). It is not known why these molds were given all-new names (excepting that the name "Omega Spreem" is a clear corruption of the name of the robot he was intended to represent, "Omega Supreme"), or even if the odd color schemes they were given were always the intended color schemes (perhaps in the same way that Action Master Thundercracker's color scheme in no way resembles that of the original Thundercracker). We simply got what we got, and fans have been trying to deduce what they can from the few clues available to us for over 25 years now.
Posted by Mark Baker-Wright at 9:00 AM