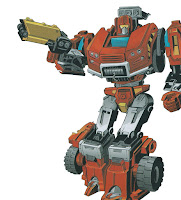 This Christmas season has been an unusual one for Transformers fans. In just the past few days, evidence has come to light suggesting the possibility that Fun Publications will no longer be running BotCon nor the Official Transformers Collectors' Club after December 2016. So far, there has been no official statement. Just a scattering of circumstantial evidence that seems to be leading to that conclusion. For some, this is seen as a welcome Christmas present. For others, this means a time of uncertainty and confusion. For me, it is, at the very least, an opportunity to focus again on some of the toys that Fun Publications has caused to exist, that most certainly would never have come to exist without them. Thus, for this Christmas holiday, I am showcasing Lift-Ticket, one of the exclusives from BotCon 2015. 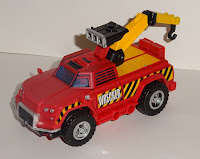 Lift-Ticket is a redeco of the 2013 Hoist figure from the Generations line, specifically using a color scheme that had been used for the "4WD Hilux Wrecker Type" figure from the Diaclone line back in 1983 (using the same pre-Transformers mold which was brought over to create the original Hoist toy in 1985). Fans had been asking Fun Pub to do Diaclone-themed figures for a number of years, and Lift-Ticket (along with another Diaclone-inspired figure he was packaged with, a black Skids redeco called "Burnout") represents an attempt to meet this demand.

One of the features of the Diaclone line that made Diaclone toys distinct from the later Transformers toys that used the same molds was the inclusion of a small "Diaclone driver" that could interact with the toy. While the BotCon exclusives paid homage to this fact, the "Diaclone driver" homages were made using the molds of another figure, and included with a different set at the convention. As I didn't get that set, I don't have the figure to showcase here, although I can link to Seibertron.com's image of "Cline," Lift-Ticket's pilot. 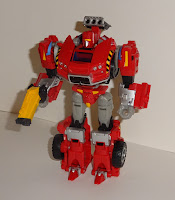 Regarding the decision to withhold the Diaclone driver figures from the original 1980s Transformers toys, I don't know which came first; if it was made for economic reasons (one less bit of plastic to produce keeps costs down), or if this was driven by the fiction being created by folks like Jim Shooter and Bob Budiansky, which dictated that Transformers were not piloted mecha (as the Diaclone robots were), but instead were sentient beings in their own right.

As I suggested earlier, Lift-Ticket is an example of a toy that would never have come to exist without Fun Publications' involvement. Time will tell if their time producing Transformers comes to an end after 2016, but in the meantime, there is still another year to go. 2016 already promises at least two complete exclusive combiner sets, in addition to several other special figures. If this is indeed Fun Publications' swan song, it nonetheless looks to be a memorable one. I look forward to what 2016 will bring.
Posted by Mark Baker-Wright at 9:00 AM