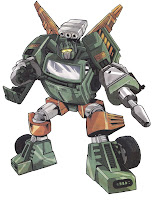 Sometimes I have these Friday features planned weeks and weeks in advance. Other times, I post something that I only thought about right before the post itself appears. This week is one of the latter. You can blame Jim Sorenson, who posted a review of Marvel issue #14 yesterday. Featured prominently on the cover is Hoist, who was among a number of Autobot characters introduced in that issue. I used to really like Hoist, although I have to confess that my toy has been sitting untouched on my shelf for the longest time. I figured this was an excuse to pull the figure down and clean it up. 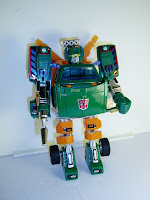 Hoist is perhaps unusual among moderately-well-known characters in that, although he is almost always depicted as having only one humanoid fist, his toy is perfectly capable of having two, as the fists and missiles are all interchangeable. This perhaps explains why the artists can't seem to decide whether Hoist is left-handed or right-handed. The art above shows a right-handed Hoist. I prefer a left-handed orientation, as in Hoist's original Marvel #14 appearance. Perhaps the fact that I, myself, am a southpaw makes me a bit biased, but I'm not alone. I've found more instances of a left-handed Hoist on the TFWiki than right-handed versions. 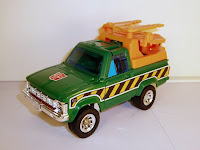 Hoist's toy is a remold of the Trailbreaker toy, featuring a different head and with towing gear on the back of the truck replacing Trailbreaker's camper shell. Although the original Hoist was available in 1985, I have the 2003 Toys R Us Exclusive reissue. Like nearly all such TRU G1 reissues of that time, Hoist was priced considerably higher than many people were willing to pay, and thus the reissue became something of a shelfwarmer. Even after TRU slashed prices to single-digit levels, boxes remained unpurchased for quite some time. Good news for me insofar as it meant I could pick up Hoist fairly cheaply, but really bad news in terms of getting other reissues in the future. I blame the costs of die-cast metal.
Posted by Mark Baker-Wright at 12:00 AM