Video Game 30th Anniversary of the Month - Pac-Man Plus

There is little question that the early 80s was my era when it comes to video games. I really haven't kept track of updates to the genre in the past couple of decades. But I do remember the games of my childhood fondly. Pac-Man Plus, the fourth game in the Pac-Man franchise, holds a special honor, being the only game for which I have a framed marquee hanging on my wall! 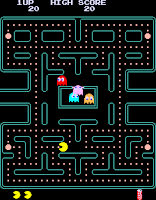 Pac-Man Plus may seem, at first glance, to be a step backwards from its immediate predecessor: Super Pac-Man. In fact, as the game opens, there are only two visible differences between this game and the original Pac-Man. The most of obvious of these is the green color of the maze (the original game has a blue maze). The second is far more subtle: at the lower right-hand side of the board, where you would have seen cherries before, the icon is now a soda can. A third change is apparent once you've eaten an energizer: the ghosts still turn blue, but they become squat and have a green flag growing out of their head (I've also seen this referred to as an apple stem and/or a leaf. I don't know what the official designation is). 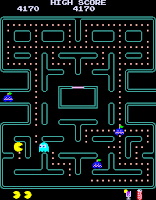 It would be a mistake to assume that the only differences between this game and the original are purely cosmetic. This game is quite a bit harder than the original. The ghosts are noticeably faster and harder to avoid, and the energizers don't last as long. Not only that, but whereas it used to be the case that eating an energizer at least guaranteed that your nearby nemesis would be vulnerable for a fraction of a second* (encouraging players to wait to gobble the energizer until a ghost was almost on top of you), the energizers in Pac-Man Plus sometimes only cause three of the four ghosts to turn blue with fright, and usually the ghost that remains deadly is the one that's still right next to you!

One change to Pac-Man Plus actually helps the player, in that eating a bonus item in the center of the maze renders all of the ghosts vulnerable in much the same way as an energizer. However, all of the ghosts turn invisible, which makes catching them rather difficult (if you manage to succeed, however, they're worth twice as much as with a normal energizer). The ghosts are still vulnerable for a brief moment after they become visible again before becoming deadly to Pac-Man's touch once more. 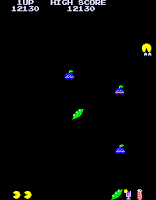 Ghosts aren't the only things that become invisible from time to time in this game. If you manage to make it at least to the third board, eating an energizer will occasionally cause the entire board to become invisible, leaving only Pac-Man, the ghosts, and perhaps the center-board bonus able to be seen by the player. Even the dots are invisible while you try to get the currently-vulnerable ghosts. Good luck navigating around all those walls. They're still there, you just can't see them! I can't vouch for this myself, but the invisible maze is said to become permanent later in the game, as opposed to simply being energizer-focused.

Some purists may dispute the designation of Pac-Man Plus as the fourth game of the franchise. The game was, after all, basically just a Pac-Man machine with a single modifier chip added in to change up some of the graphics and gameplay. Also, like Ms. Pac-Man before it, Pac-Man Plus was produced by Bally Midway without authorization from Namco (although Namco has since embraced both games into the Pac-Man family). Even so, it remains a fun, if admittedly difficult, game to play.
*If you were really, really, good, you might find yourself at an advanced board that wouldn't give you any energizer powers at all, but that only happened well into the game. I'm not talking about that.
Posted by Mark Baker-Wright at 9:00 AM