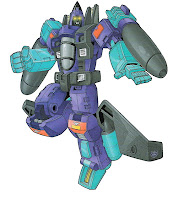 When I first learned that the official Transformers Collectors' Club would be offering Generation 2 Ramjet as one of their 2011 exclusive figures, I wasn't especially happy about it.

For those who don't remember, a bit of context is in order. The BotCon 2010 exclusives were all based around the Generation 2: Redux concept, and it was revealed during a Q&A session at the convention that the original intention was to include both G2-colored Ramjet and Action Master-colored Thundercracker (and, in fact, AMTC was the original idea around which everything else that year came to exist), but Hasbro told them that the molds were not available at the time needed to use them as convention exclusives. However, G2-colored Ramjet would be a 2011 club exclusive. At the time, it seemed as though AMTC was being passed over in favor of the Ramjet character, never to actually be produced. We now know that AMTC was made as a BotCon 2011 exclusive (as "Shattered Glass" Thundercracker), but that knowledge was still nearly a year away, and I was upset that AMTC wasn't the one chosen for the club.

Now, with the benefit of hindsight, I'm sorry I was so hard on the club. Don't get me wrong, I'm very glad AMTC was made, and I still prefer that character to this one, but that's less anything against Ramjet, and more that AMTC was such a brilliantly gauche idea. I'm glad to have Ramjet, too.

Using the mold designed for "Seeker" jets in the 2006 "Classics" line, Ramjet now sports a Generation 2-emulating purple and teal color scheme. Like most club and convention exclusives, Fun Publications was able to use a greater number of paint applications than would normally be used on a product intended for retail, but Ramjet is unusual in that the silver highlights to the sides of Ramjet's head and on Ramjet's feet use specially-made stickers that emulate the similar stickers on the original Generation 2 toy.

If Punch/Counterpunch angered club members by selling out within three days of the start of the pre-order period, Ramjet added even more fuel to the fire. Ramjet was declared "sold out" within less than a full day of being presented for pre-order. While the question of whether or not Ramjet was a better choice for club exclusive than AMTC is happily moot, there's no denying that it was indeed one of the most popular club exclusives to date. I would even go so far as to say that Ramjet's runaway success was one of the factors leading Fun Publications to announce the upcoming "Figure Subscription Service" that is expected to guarantee club members each of six toys that are expected to be available in the upcoming year. I hope that the system proves to be a success for all concerned.
For those with especially sharp eyes, yes, my specimen appears to be misassembled. He apparently came with two right fists, and the one on the left hand is simply installed upside-down! Ahhh, well. I actually didn't notice it myself until just minutes before this post was scheduled to go live. I doubt I'd get much traction trying to get the problem fixed now, and since it took me so long to notice in the first place, I guess I'm not really suffering....
Posted by Mark Baker-Wright at 9:00 AM