The End of Superman's Marriage

Now, if you don't follow comic books, you may well be saying to yourself "Superman's married?" Yes, my friends, and he has been for nearly 15 years now. But ever since comic book fans learned that DC Comics would be making massive changes to their fictional universe, and resetting all of their titles (including the 900+ issue runs of Action Comics and Detective Comics) to "issue 1" in a couple of months, we've suspected that the marriage of Clark Kent to Lois Lane was one of the realities on the chopping block. Alas, it's been made official in the past few days. Superman's days as a married man are numbered.

For those who don't follow comic books, I hasten to clarify that it's not that Lois and Clark are getting a divorce. Instead, DC is doing what Marvel did with Spider-Man a few years back: they're re-writing history in such a way that, after September, they never got married in the first place.

I have to be honest, when DC made it clear a few months ago that they were effectively rebooting their entire franchise, I was annoyed at the fact that Action and Detective won't be given the chance to reach "1000" uninterrupted. But the records they already have will, I'm confident, never ever be broken, and maybe that's enough. And the proposed changes to Superman's uniform are significant, but nothing I have any great problem with (besides, the "red underwear on the outside" has been an item of ridicule for ages now). But to know that this particular facet of Superman's history for the past 15 years is about to be wiped away as if it never happened, this is a change that truly angers me.

I don't really want to make this into one of those "another assault on the institution of marriage" diatribes. I'm sure that some will read this move by the comics publisher in that light (much as some people did when Marvel vetoed the marriage of Peter Parker to Mary Jane Watson out of existence), and I'm not entirely sure that my opinion can be wholly separated from that kind of thinking. But it's not just that. I honestly was never all that invested in Spider-Man's marriage.  Marvel has never been a main source of my comic book interest (the 80's Transformers comic notwithstanding). Superman's marriage to Lois Lane held more of a symbolic value for me. 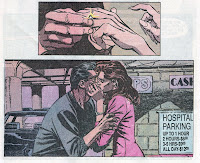 I suppose part of the reason for this has to do with a few quirks of timing. The most legendary "continuity reboot" of DC's history was, of course, Crisis on Infinite Earths back in 1985. I was 11 years old when, shortly after the series finished, Superman's then-nearly-50-year history was rewritten, and it seemed a good time to start paying attention. So I was able to witness Clark's engagement to Lois in 1990. I saw Clark reveal his secret identity as Superman to Lois (permanently for the first time ever in the "main" continuity, the upcoming reboot notwithstanding). I saw the relationship weather serious setbacks (not the least of which was Superman's death shortly after I started college in 1992, although of course he "got better"), yet survive them, until they finally got married in 1996, coincidentally around a time that I was recovering from a serious break-up of my own. Watching Clark Kent and Lois Lane tie the knot, if only fictionally, nonetheless helped me through my own relational difficulties, and it's hard to watch that event disappear.

Of course, DC needs to do whatever they can to keep people buying their comics, especially in this age of the decline of print publications, and my own experience demonstrates that such reboots can achieve this goal. And, let's be honest, I haven't actually bought any of DC's comics (or anybody else's, for that matter) in quite a few years. (For those who are wondering, that includes IDW's Transformers comics, which I stopped reading after the horrible All Hail Megatron) I do however, still have the issues of all those pivotal points in Superman's history for the past 20 years or so (not the entire line. Just those pivotal points), and although DC can change the history of their ongoing fictional universe, they can't take those old back issues away from me. At least that's something.

But it's still sad to see one of the most enduring marriages of comic book history (and, at only 15 years, that may be a commentary worth noting for another time) disappear.
Posted by Mark Baker-Wright at 12:00 AM