Donald Duck Skateboarding: The Evolution of an Image 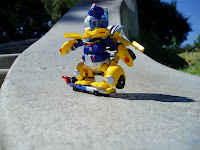 The second picture that I entered in last week's "Transformers Summer Fun" contest was this one of Donald Duck skating down a ramp at the park.  Although the skateboard accessory that comes with this toy made it an obvious choice for depicting a Transformer in a summer activity, I actually had to go through several phases before I was able to settle on this picture as one worthy of submitting to the contest. 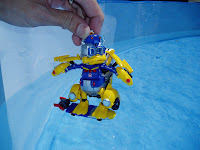 My original idea was to have Donald surfboarding.  I was already unsure of how I would create a sufficient wave to convey the image of surfing, but I never really even got that far.  Since the figure doesn't float upright especially well (or at all!), I had to hold the toy with my fingers, and it was quickly obvious that this ruined the shot.  I later experimented with holding the toy up with fishing wire, but this made it difficult to keep the figure facing the direction I wanted for the shot.  I ultimately gave up on water-based poses entirely. 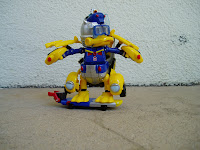 Establishing that Donald was stuck to terrestrial skateboarding, there was still the question of setting up the shot.  I attempted several angles, including overhead shots, on multiple surfaces, but all of the shots still seemed too static to be interesting.  I needed to convey a sense of motion. 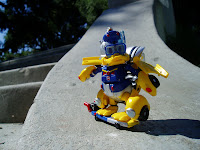 Finally, while at the local park, I stumbled upon a small staircase with sloped sides.  The slope was slight enough that I could fit Donald on the curve without having the toy just roll off, and then I could shoot the toy at an upward angle to create the sense that Donald was skating down the ramp.  I still found myself going back and forth between the image I sent for the contest and this one, which is undeniably centered more precisely than the other.  I ultimately went with the image with Donald at the top of the frame, feeling that the lines of the ramp, perhaps aided by the line of Donald's shadow, conveyed the sense of direction and movement down the ramp that I was looking for.

All in all, I was pleased with the result, but this still isn't my favorite image of those I submitted.  That honor actually goes to the one my brother Nick created with Photoshop.  It depicts Optimus Prime playing a game of volleyball with his fellow Autobots.  Although it didn't win the contest, either (I don't think they really wanted Photoshopped entries), it has gotten a lot of positive feedback on DeviantART.
Posted by Mark Baker-Wright at 12:00 AM